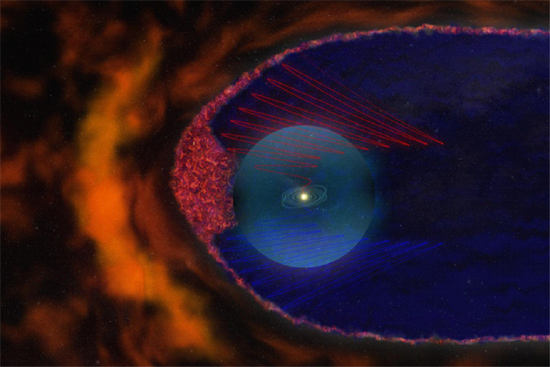 “Bubbles” of magnetic energy are said to surround the Sun’s heliosheath.

“In all our quest of greatness, like wanton boys, whose pastime is their care, we follow after bubbles, blown in the air.”
— John Webster

According to astronomer Merav Opher of Boston University’s Voyager team: “The Voyager probes appear to have entered a strange realm of frothy magnetic bubbles. This is very surprising.”

Voyager 1 encountered the heliosheath in December 2004, followed by Voyager 2 in August 2007. It was Voyager 1 that first detected fluctuations in the electron count as it traveled through the heliosphere, while Voyager 2 made similar observations later in 2008.

Since NASA’s computer model of the heliosphere works only if the readings are assumed to come from flying in and out of the aforementioned bubbles, some means for their creation had to be concocted. Enter stage left, the old tried and true, magnetic reconnection.

As a press release about the discovery states, the Sun’s “twisted and wrinkled” magnetic field lines far out in the heliosphere “bunch up,” causing them to “reconnect” and explosively “reorganize” into long, sausage-shaped bubbles of magnetism.

The European Space Agency’s Cluster mission recently observed anomalous bubbles that “grew and popped” around Earth, as well. The magnetic interactions were detected where Earth’s magnetic field meets the barrage of charged particles known as the solar wind. In the same way as the bubbles around the Solar System are supposed to be created, magnetic reconnection was used to explain this case, as well.

Earth’s magnetospheric “bubble” is known among space plasma physicists as a Langmuir sheath and is part of an electrical circuit coupled to currents flowing in the Sun’s heliosphere. Langmuir sheaths are electrically charged double layers of plasma, in which opposite charges build up near each other, creating an electric field between them. Double layers can accelerate ions to extreme velocities that might easily be misinterpreted as high temperature.

The same conditions are most likely present where the solar magnetosphere, or heliosphere, meets the dissimilar charge of the Interstellar Medium (ISM). Two regions of dissimilar plasma will form a Langmuir sheath between them, which leads to a potential “bubble” formation.

Plasma in a laboratory isolates itself with thin walls of oppositely charged double layers, so it is probable that the same thing is happening around the Sun and around Earth. By extension, the same thing is most likely occurring around our galaxy, the galactic clusters, and the superclusters. At every scale, plasma behaves in the same way. Proving that case will be impossible for centuries to come, no doubt, because there is no way to know except by placing a Langmuir probe into each location and measuring the current differential.

Charged particles in motion comprise an electric current. That current wraps itself in a magnetic field. As more charged particles accelerate in the same direction the magnetic field gets stronger. A familiar idea to electrical engineers, but when astronomers find magnetism in space they are mystified. They resort to ironic ideas about voids with magnetic fields frozen inside them or so-called “magnetic reconnection.”

Electric Universe advocate Wal Thornhill wrote: “…plasma in space forms a bubble, known as a ‘virtual cathode’. Effectively it is the heliopause. In plasma terms, the heliopause is not a result of mechanical shock but is a Langmuir plasma sheath that forms between two plasmas of different charge densities and energies…Such ‘bubbles’ are seen at all scales, from the comas of comets to the ‘magnetospheres’ of planets and stars.”

Although no specific data is yet forthcoming, Electric Universe scientists assume that plasma behaves in space the same way as it does in the laboratory. Armed with that insight, an electrically sensitive mind will see what otherwise remains invisible.