Home Picture of the Day Twist and Shout 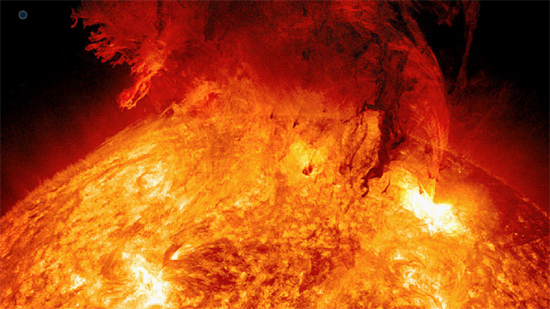 Alfvén waves are said to carry heat from the Sun’s photosphere out to its corona.

“Giant twisting waves” have been detected in the Sun’s lower atmosphere, prompting heliophysicists to speculate that they are transporting heat energy upward from lower levels into the solar corona. Why the corona is millions of Kelvin hotter than the surface is one of the Sun’s greatest enigmas.

If the Sun is a thermonuclear engine, sustaining itself through hydrogen fusion, then the core should be the hottest region, with a surface temperature as we see it, and an atmosphere that declines in temperature as distance from the surface increases. However, that is not the case. The Sun’s temperature gradient is anomalous, ranging from 7500 Kelvin at the bottom of the photosphere to 4500 Kelvin at the top. It then increases substantially, reaching 2 million Kelvin in the corona.

Some scientists suggest that the Sun accelerates charged particles into space through “acoustical wave-guides,” known as magnetic flux tubes. Structures called spicules rise thousands of kilometers above the photosphere and supposedly carry hot gas with them. This mechanism was recently proposed as an explanation for coronal heating.

Another method for heating the corona involves a recent discovery published in the journal Science: Alfvén waves have been shown to transport energy into the corona, or outer layer of the Sun. According to a relatively recent press release, magnetic oscillations spread upward from the solar surface, carrying enough energy to heat the coronal plasma.

In an Electric Universe, the extreme temperature in the lower corona is most likely due to electrically accelerated positive ions colliding with relatively static ions and other neutral atoms. Electric discharges in plasma take the form of long, thin, twisting filaments that can best be described as tornadoes of glowing plasma. Anode tufting on the Sun’s surface is mistaken for convection cells.

In the Electric Sun hypothesis, the Sun is a glowing anode, or positively charged “electrode.” The cathode is an invisible “virtual cathode,” called the heliosphere, at the farthest limit of the Sun’s coronal discharge, billions of kilometers from its surface. This is the double layer that isolates the Sun’s plasma cell from the galactic plasma that surrounds it.

Electric forces occurring within the double charge layer above the Sun’s surface cause the observed phenomenon. The Electric Sun model predicts the reverse temperature gradient and describes how it occurs. If the temperature discontinuity did not exist, that would be a problem for the Electric Sun hypothesis.

The Sun’s reverse temperature gradient agrees with the glow discharge model, but contradicts the idea of nuclear fusion energy trying to escape from within the Sun through magnetic oscillations.