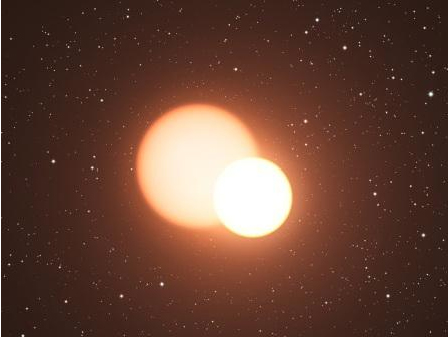 Victory for one theory should mean defeat for its rival.

An ESO (European Southern Observatory) press releaseboasts, “Pulsating Star Mystery Solved.” Cepheid variables are stars whose rates of pulsation vary with their luminosities: the brighter the star the longer it takes to complete a cycle of variability. It’s called the period–luminosity relationship.

By timing the period of pulsation, the absolute luminosity of the star can be calculated. By comparing that quantity with the star’s apparent brightness, the star’s distance can be determined. Edwin Hubble’s discovery of Cepheids in the Andromeda galaxy in 1924 was the key to proving that the “spiral nebulae,” formerly thought to lie inside the Milky Way, were actually independent galaxies far outside the Milky Way.

Until now, two theories that predict properties of Cepheids have been in conflict. The press release explains: “Predictions of their masses derived from the theory of pulsating stars are 20–30% less than predictions from the theory of the evolution of stars. This embarrassing discrepancy has been known since the 1960s.”

The newly discovered Cepheid is a member of a binary system in which the two stars pass in front of each other as seen from Earth. This configuration enables astronomers to measure not only variations in their luminosities but also their orbital velocities. From these measurements, the stars’ masses can be determined with unprecedented accuracy. “The mass of the Cepheid is now known to about 1% and agrees exactly with predictions from the theory of stellar pulsation. However, the larger mass predicted by stellar evolution theory was shown to be significantly in error.”

Also significant is this last result is passed over without further comment. One can presume that the aforementioned “embarrassing discrepancy” has paralyzed advocates’ abilities for critical thinking. The discrepancy can only be embarrassing for an orthodoxy of belief which admits, with false humility, that Cepheids are “not fully understood.” The admission thinly hides the implied obverse that Cepheids are “almost entirely understood,” a scientific conceit rightly deserving embarrassment.

That the result confirms the stellar pulsation theory necessitates that it falsifies the stellar evolution theory. If astronomers were philosophically honest, they would declare the theory nullified in accordance with Karl Popper’s 1959 proposal of falsification as a criterion to distinguish a scientific theory from a pseudoscientific one. Falsification was to be a “convention” that required scientists to agree not to adjust a theory to accommodate test results but, when falsified, to start over with searches for alternative theories. Falsification is not a property of a theory that justifies acquiescence in orthodoxy but a convention that enables opportunities for discovery of new theories and the overthrow of conceptual monopolies.

But in view of past performance, stellar evolution theory willbe “adjusted.” A substantially different theory will be put forward with the same name in order to maintain the illusion of continuity and cumulativeness of conceptual progress. The only continuity will be the tenure of advocates; the only cumulativeness will be in their power and salaries. The conceptual claim is fraudulent.

In the Electric Universe, variations in luminosity are caused by oscillations in the currents powering the stars and are likely “atmospheric” effects. Mass is proportional to the charge on a body and may be unrelated to the oscillations unless they deposit or remove charge. The process is “hardly at all understood” and is an opportunity for discovery and development.

When Cepheids are used as indicators for the distances to nearby galaxies, a necessary assumption is that mass is invariant throughout the universe. But if mass varies with charge, each galaxy—and therefore each star in it—could have a different charge distribution with respect to the intergalactic plasma. Each galaxy could have an idiosyncratic period–luminosity relationship for Cepheids, rendering them unusable for determining distances to other galaxies.

Halton Arp’s discoveries of connections between high-redshift quasars and low-redshift active galaxies have already brought “ultra-luminous” objects at great distances back to being “normally luminous” objects at much closer distances. The objects may even be “under-luminous” and located at nearby distances. With both redshift and Cepheids thrown into doubt, astronomers are left with no reliable way to determine distances to galaxies. Astronomy is once again open to new fundamental insights.

The ornate knowledge with which the Queen of the Sciences has proclaimed herself to be draped is turning out to be invisible. Perhaps she should not have paraded herself so far down the street without an alternative theory at hand.