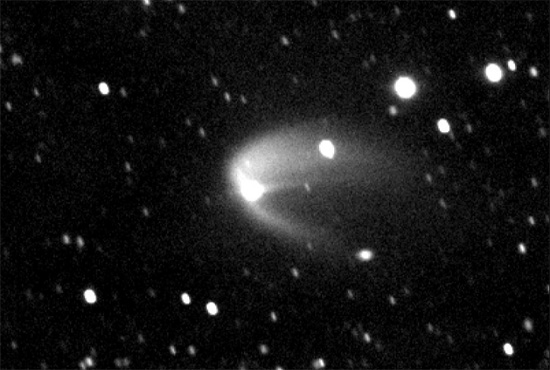 In an Electric Universe, comets are thought to be rocks moving rapidly through the Solar System’s force fields.

Comets are often called “dirty snowballs” by astronomers. However, various investigative missions, such as Giotto and Deep Impact, revealed them to be blackened, cratered, and fractured. No ice fields, reflective crust, or watery clouds were observed. The Giotto spacecraft’s close approach to Halley’s comet discovered the blackest object ever seen. The comet’s energetic plumes blasted out from a dense nucleus.

Comet Tempel 1 resembled an asteroid more than a chunk of muddy slush. Craters, boulders, and cliffs were observed—nothing like a snowball venting. Water vapor was discovered near the comet, but there was too little ice on the surface to account for it.

Other comets defy convention: Shoemaker-Levy 9 exploded when it encountered Jupiter’s magnetosphere, and the pieces did not expel the volatile compounds astronomers expected to see. Deep Space 1 flew by comet Borrelly in 2001, finding it hot and dry instead of cold and wet. The Stardust mission to comet Wild 2 found a great deal of dust, but no trace of water could be found on its surface.

Comets travel through a differential electric potential as they move toward the Sun. The variable electric fields cause visible glow discharges. Rather than “dirty snowballs” or even “snowy dirtballs,” comets are electrically active, solid bodies.

Comets form plasma sheaths that can become comas, often more than a million kilometers in diameter. Plasma filaments connect comets with the Sun’s electric field, generating “hot spots” on their surfaces. So hot that extreme ultraviolet light and X-rays were detected radiating from comet Hyakutake.

According to a recent press release, on December 11, 2010 asteroid 596 Scheila became much brighter than previously observed, forming a large C-shaped coma. The Swift space-based observatory did not find water vapor thought to be “normally” associated with comets. Instead, two dusty plume-like tails trailed behind the asteroid, subsequently fading over the next several months.

A Hubble Space Telescope image of 596 Scheila reveals a broad coma, along with a dust tail. As team leader David Jewett said: “The Hubble data are most simply explained by the impact, at 11,000mph [17,700 km/h] of a previously unknown asteroid about 100 feet [30 metres] in diameter.”

The primary reason for thinking that 596 Scheila is an asteroid and not a comet is because there is no water vapor in its vicinity. The team investigating the Deep Impact mission to comet Tempel 1 claimed that there was “lots of ice” ejected when the copper projectile hit the comet’s surface, so it was expected that 596 Scheila would also have lots of ice if it was a comet. However, Electric Universe advocate Wal Thornhill took issue with that presumption just after Deep Impact:

“The flaw in the conventional approach is that only gas-phase chemical reactions and reactions induced by solar radiation (photolysis) are considered. The far more energetic molecular and atomic reactions due to plasma discharge sputtering of an electrically charged comet nucleus are not even contemplated…The hydroxyl radical, OH, is the most abundant cometary radical…It is chiefly the presence of this radical that leads to estimates of the amount of water ice sublimating from the comet nucleus.

“The electric field near the comet nucleus is expected if a comet is a highly negatively charged body, relative to the solar wind…So the presence of negative oxygen and other ions close to the comet nucleus is to be expected. Negative oxygen ions will be accelerated away from the comet in the cathode jets and combine with protons from the solar wind to form the observed OH radical at some distance from the nucleus. The important point is that the OH does not need to come from water ice on, or in, the comet.”

As mentioned in a previous Picture of the Day, there are several “Centaur objects” orbiting near the asteroid belt that demonstrate that indeterminate state between comet and asteroid. 2060 Chiron is classified as both comet and asteroid. Chiron manifests a coma whenever it reaches its closest approach to the Sun, although it does not grow a tail. 174P Echeclus displayed a coma in 2005, so it too is now classified as a cometary asteroid. At least ten Centaurs are known to have cometary activity at great heliocentric distance.

Proponents of mainstream viewpoints are slowly beginning to realize that asteroids and comets exist in a continuum: neither are strictly identical nor completely different from the other. When the Stardust mission returned to Earth with samples from the coma of comet Wild 2, scientists found that the material looked more like meteoric dust than what was expected from a dirty snowball.

Stardust also found that the coma of Wild 2 contained the “signature” of water vapor, although the farther from the surface of the comet it was, the greater the amount of vapor it saw. Whatever water or hydroxyl compounds found in cometary comas are probably created there, as Wal Thornhill has explained: ionized oxygen from the comet reacts with hydrogen ions streaming out from the Sun. No “jets” of water vapor spew from comets, and no icy plains have ever been observed. It is electric effects that are seen. Discharges and arcs form the comet phenomena.

Exposing an asteroid to an intense electric field over time will most likely create a comet.