Home Picture of the Day The Juno Mission 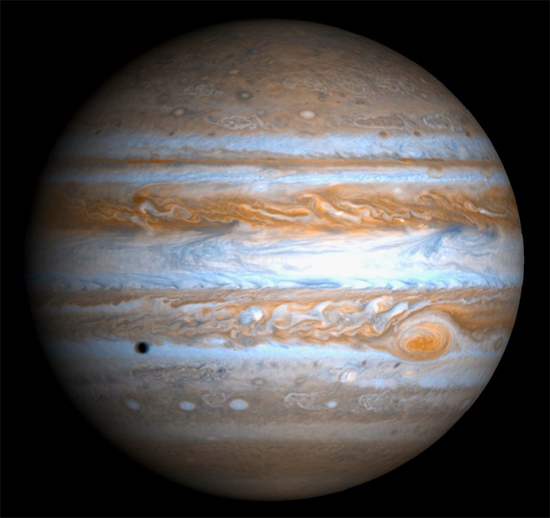 A new spacecraft will orbit Jupiter for over a year.

On August 5, 2011 NASA launched the Juno Mission to Jupiter. After traveling out past the orbit of Mars, the spacecraft will return for a gravity assist from Earth on October 9, 2013, and then head out to deep space. Rendezvous with Jupiter should take place in July of 2016. Upon arrival, Juno will enter a north-south polar orbit.

This new mission is designed to explore Jupiter’s atmosphere: composition, temperature, cloud motions and other properties. It will also graph the giant planet’s magnetic and gravity fields, its magnetosphere, and the aurorae.

Juno will take about 11 days to complete one orbit, while Jupiter spins once in 10 hours. Juno will de-orbit into Jupiter’s cloud tops in 2017, after completing 33 passes around the planet.

A 2008 press release from the Jet Propulsion Laboratory announced that Jupiter’s rings are electrically charged. Astronomers proposed that Jupiter’s moon Io is “kneaded” by Jupiter’s gravity, causing the charged particles to be ejected by “volcanic” plumes. The ions flow in an electric circuit to and from Jupiter.

More than six years ago, the Picture of the Day addressed Io’s “volcanic” plumes. It was shown that they are plasma discharges from the moon to the gas giant. Some planetary scientists have begun to acknowledge an electrical connection after Io’s “footprint” was seen in Jupiter’s polar aurora.

All four of Jupiter’s largest moons were discovered to leave their marks in the aurora in the shape of “tails” flowing within the plasma column. Later, when NASA launched New Horizons on a mission to study Pluto and Charon, the “plumes” of Tvashtar, a gigantic volcano on Io, were found to be filamentary in structure, with indications that they are actually corona arc discharges from the electric “hot spots” linking the moon with Jupiter.

Jupiter’s rings are formed out of a thin sheet of material encircling the planet. The ring structure is quite diffuse, making observations difficult unless they are in correct alignment with the Sun. The outer radius begins at 129,000 kilometers, almost the same distance as the moon Adrastea. The four small moons, Metis, Adrastea, Amalthea and Thebe, are said to influence the structure of Jupiter’s rings in the same way that the “shepherd moons” of Saturn govern the shape of its huge ring formation.

Conventional theories assume that the Universe is electrically neutral, so when observational evidence confirms electrically active plasma, localized phenomena no matter how improbable are invoked. Tidal forces and volcanoes are presented as the cause for the activity seen on Io and the evidence for electric circuits is ignored. In the case of Jupiter’s rings, the same thing is happening. The ring charge is said to be caused by sunlight and shadow rather than by an electrically active circuit between Jupiter and the Sun.

An electrical interaction between Jupiter and its moons means that they are charged bodies and are not electrically neutral. Jupiter exists in a dynamic electrical relationship to the Sun and it is now known that charged particles from the Sun and not “electric dynamos” power the planetary aurorae. Just like the aurorae, the ring system on Jupiter is probably behaving in similar fashion to what is seen on Saturn, so a similar explanation is most likely correct.