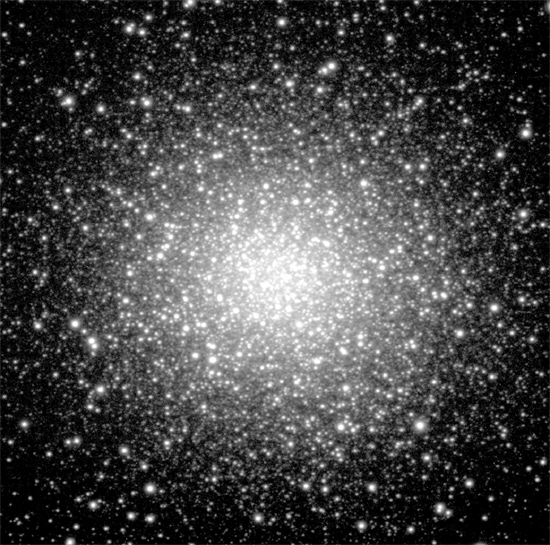 There are more globular clusters around the Milky Way than there ought to be.

Stars form along filaments of electric current that flow through, into, and out of our galaxy. Studies of galactic magnetic fields show that the same process takes place to a greater or lesser extent in every galaxy. A recent Picture of the Day discussed another group of objects in association with the Milky Way, dwarf galaxies. It was noted that theories of galactic evolution suggest there should be far more of them than there actually are.

Another stellar assemblage, globular clusters, also defies conventional theories. In their case, it is their existence that is questionable. Why are they there? Some globular clusters, such as Omega Centauri, contain hundreds of thousands of stars, yet gravitational models of the cosmos would suggest that they should not be spherical.

M14, shown above, and its globular companions, “hover” over both hemispheres of our galaxy like a “swarm of bees,” as one astronomer put it. An October 19, 2011 press release from the European Southern Observatory (ESO) announced the discovery of a few more of them, bringing the total number to 148. What causes them to retain their globular shapes when they must have completed thousands of orbits around the galactic nucleus by now?

Gravitational theory demands that the tidal forces acting on the clusters in their orbits as they pass through the plane of the Milky Way would disrupt the spheres, leaving a collection of stars that is more open or chaotic than the symmetrical balls that we see.

Tightly-bound concentrations of stars in orbits forming a sphere surround the nuclei of many galaxies. The velocities of those stars are conventionally attributed to a massive, or “super massive,” black hole at the very center of the sphere. In an Electric Universe, impossible “black holes” are explained as plasmoids, which store the electromagnetic energy feeding the galaxy in a very compact volume. As the well-known equation relating mass to electromagnetic energy explains, the plasmoid will exhibit an intense gravitational field.

The scalability of plasma phenomena allows us to see globular clusters as small-scale galactic nuclei. Astrophysicists have already suggested that globular clusters may contain small black holes to account for their stellar velocities. Such a model fits well with Halton Arp’s observation that galactic nuclei eject core material, which evolves into companion galaxies.

It seems that globular clusters are “seeds” flung out of galactic cores or “mini galaxies” born in more dense star-forming regions of its parent. It is significant therefore that the very active galaxy, M87, has 13,000 globular clusters compared to the Milky Way’s 148.

The “unusual behavior” of stars, star clusters, and galaxies can be explained if astronomers would recognize the activity of electricity in space. There are extremely sensitive detectors in orbit right now that are capable of increasing awareness, but instead they are being used to generate more mysteries. The electric motors of the stars and galaxies could have been charted years ago. Perhaps a more attentive study of globular clusters, since they are closer and more visible, will add to our understanding of galactic nuclei.