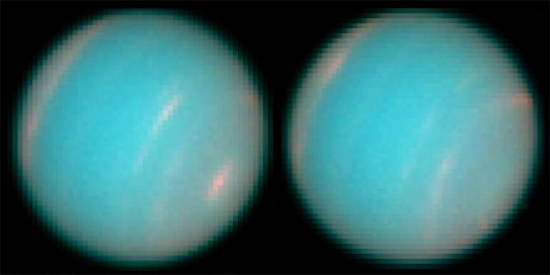 The length of Neptune’s day has been determined.

Recently, Erich Karkoschka, of the University of Arizona, used some established features in Neptune’s cloud tops to calculate the length of its day: 15 hours, 58 minutes.

On July 12, 2011 Neptune completed its first orbit around the Sun since its discovery on September 23, 1846. Detailed observations of the giant planet are limited, since it is at such a great distance and technology has had to catch up to simply knowing it is there. For example, spectrographic data about Neptune is limited to the last 30 years or so, meaning that only about 25% of any seasonal variations on Neptune have been observed.

Neptune is invisible to the naked eye, never reaching more than seventh magnitude in brightness, so it was the first planet to be discovered based on observations of other celestial bodies. By analyzing the orbital anomalies of Jupiter, Saturn, and Uranus, Urbain Le Verrier predicted within one degree the position of a hypothetical eighth planet beyond Uranus. Johann Galle and Heinrich d’Arrest pointed the Berlin Observatory’s 24 centimeter Fraunhofer Refractor at the predicted position and found the planet.

A previous Picture of the Day reported that astronomers using the Very Large Telescope (VLT) discovered a ten degree Celsius temperature difference in the south polar region of Neptune. The explanation provided was that the Sun selectively heats the northern and southern hemispheres, initiating a convective flow of methane around the planet. The thermal gradients that were observed are attributed to upwellings of warmer gas within those convective streams. Researchers suggested at the time that Neptune’s atmosphere could be more thermally active than either Jupiter or Saturn.

So-called thermal anomalies have been seen on Saturn, Jupiter, Io, Enceladus, as well as on comets and moons. The various effects on comets, for instance, have been shown to be caused by plasma discharge.

Massive electrical disturbances deep below the clouds on Neptune will generate radio noise, as well as eruptions of gases from its lower atmosphere into the stratosphere where they form visible features. Those massive lightning discharges form electrical conduits that connect through Neptune’s ionosphere and magnetosphere with the Sun’s electrical environment. Thermal imaging equipment sees the warm upwelling atmosphere and interprets it merely as thermal convection.

The Electric Universe model of Neptune postulates that hot spots, hot poles, hypersonic winds (wind speeds on Neptune are estimated to be around 2000 kilometers per hour), and atmospheric banding indicate that Neptune is an electrically active planet connected to the Sun’s electric circuit.

It is principally electrical energy and not internal thermal energy that powers Neptune’s winds. Having the strongest winds in the Solar System, while being farthest from the Sun contradicts any thermal models and convection currents. There are still many chapters ahead in the story of Neptune. Conventional theory cannot be used to make sense of the data. Understanding Neptune might provide information that will help planetary scientists to better understand weather systems on our own planet.