Home Picture of the Day Mythology at Stake 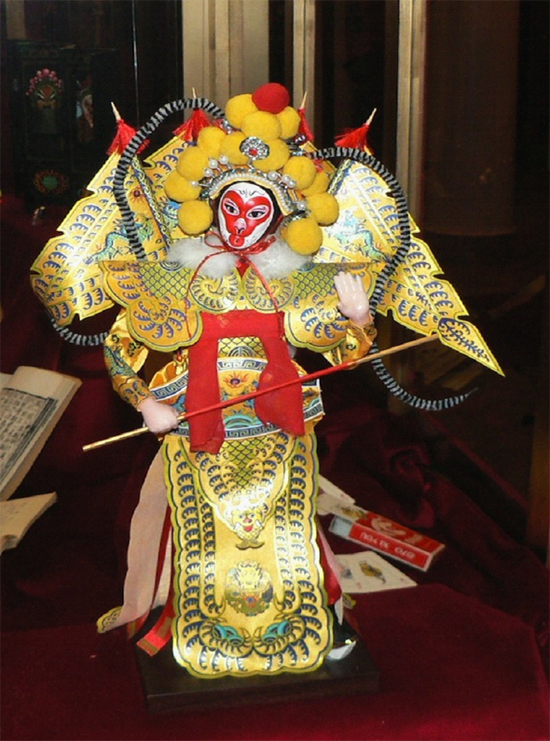 A modern statuette representing the legendary Sūn Wùkōng or "Monkey," the protagonist of Wú Chéng’ēn’s Journey to the West (Xīyóu-Jì) (1590s). Monkey’s magic rod, the Rúyì Jīngū Bàng, was described in the novel as made of iron with two gold bands, but is also depicted in other dyes, including as a solid golden staff. It was stated to be immensely heavy and had the magic ability to grow to a prodigious size, then shrink again. Upon its discovery by Monkey in “the depth of the Heavenly River,” it emitted “a thousand shafts of golden light.” © DusanH

The central challenge in comparative mythology is to account for the many similarities between traditions from different cultures and ages.

This task is all the more daunting in cases where the pertinent cultures are not known to have been in touch with each other, even indirectly, and in those where the content of the shared themes is not immediately obvious from the perspective of the local culture or environment.

A vivid example of the striking degree of convergence encountered so often in this field concerns the following two traditions from respectively ancient Sumer, recorded on clay tablets some 4,000 years ago, and New South Wales, Australia, delivered orally sometime prior to 1925. Both belong to the prominent class of ‘origin myths’ and describe how some mythical being lifted up the sky from the earth by means of a golden rod-like implement.

In the Sumerian tale, the god Enlil, also styled Gibil, separates heaven and earth with his al or “hoe”:

The deity allegedly did so at a sacred place called uzu-è-a, “where flesh came forth,” raising or suspending the bulug, the “axis of the world,” at Dur-an-ki in the ancient Sumerian city of Nippur. The idea may have been that the hoe itself transformed into this column.

A remarkably close parallel to this tradition is furnished by a myth from the people from the headwaters of the Murrumbidgee River, a branch of the Wiradjuri, in central New South Wales. In this, a “rod made of gold” once enabled an anonymous chief to lift up the sky by its magic protrusion:

“It surely was a rod made of gold, for the blacks say that it was very bright and of the colour of gold. … He lifted it up; and, behold! As it touched the sky, the sky went on and up before it. And the rod grew. … So the sky went on up as far as the rod grew, and for as long as the chief pushed it.”

The elevation of the sky, the prodigious expansion of a sky pillar and the golden stanchion of the sky are archetypal motifs that recur and combine worldwide in a seemingly endless kaleidoscope of narrative variants. Is the occasional occurrence of near-identical versions amid this dazzling phantasmagoria a mere result of coincidence? Or does the precise embedding of myths such as the above in a refined structural edifice of cross-cultural “creation mythology” suggest that something more fundamental is at stake?

Just as in other disciplines that handle vast amounts of “raw data,” such as comparative linguistics and paleontology, the recognition of patterns functions as an indispensable pillar of methodology. Yet whereas meanings lie beyond words and the bodies of living animals beyond dead bones, the mythologist may at times feel “poleaxed” by the bafflingly complex world of elusive forces and agents evoked in this intricate network of corresponding stories and beliefs. Just what is the subject matter of mythology in the real world preceding the myths?

In his monumental The Golden Bough, the famed Scottish anthropologist and belletrist, Sir James George Frazer (1854-1941), staked his claim that the mind everywhere evolves along similar lines, thus translating similar experiences in nature into similar superstitions and institutions. For all its elegance, however, this hypothesis does not stand up to the light of day.

It may account for some elementary traits of archaic folklore, such as that the sun journeys beneath the surface of the earth at night or is accosted by a monster during eclipses, but it fails spectacularly when it comes to a clarification of the hundreds of interconnected themes constituting the global nexus of origin myths. Few would stake their lives on the accuracy of the many tortuous “naturalistic” explanations that have been advanced for universal archetypes by those that followed in Frazer’s footsteps.

A far more attractive proposition is that such myths find their original inspiration in the collective experience of a series of conspicuous transient events occurring in the earth’s atmosphere and above. With a nod to Frazer, the perplexing resemblance many of these myths bear to each other springs from the tendency of the human mind to interpret a similar display of forms, colours and motions using similar metaphors. Meteorites, bolides, comets, eclipses, aurorae – all such phenomena were universally mythologised in terms of similar symbols. Likewise, a far more dramatic “celestial pageant” will have suggested to Sumerians and proto-Wiradjuri alike that someone lifted up the sky by means of a golden staff. On that solid foundation, interdisciplinarians can subsequently debate what physical conditions could have provoked such imagery. Does a meteorological-optical effect, such as a “sun pillar” occasionally seen at sunrise, do the trick? Or does the evidence point to the erstwhile formation and collapse of a glowing plasma z-pinch in the earth’s atmosphere and beyond? The stakes are high.
Rens Van Der Sluijs