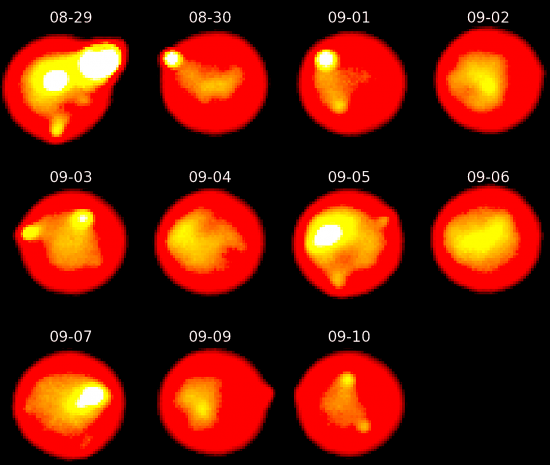 Jupiter’s electromagnetic field, recently measured by the Juno space probe, is twice as strong as consensus models predicted: 7.766 Gauss, compared to 0.66 Gauss at Earth’s South Pole. As previously written, Jupiter’s toroidal magnetosphere is approximately 650 million kilometers wide, extending even beyond Saturn’s orbit. Ions from the solar wind, as well from from Jupiter, are confined within its electromagnetic field, in the same way that Earth’s Van Allen belts confine high energy electrons.

The Galileo spacecraft found massive voltages around Jupiter. In fact, because Io revolves inside its magnetosphere, electric power greater than 2 trillion watts is dissipated between the two charged bodies. That electric charge flow creates lightning in Jupiter’s upper atmosphere, as well as polar aurorae.

The majority of planetary scientists think that Io experiences tidal forces from Jupiter’s gravitational field, heating it up, and causing volcanic eruptions. However, when New Horizons flew by Jupiter, it observed filamentary plumes with structures that suggest they are cathode jet discharges from “hot spots” linking the moon with Jupiter.

Since Io is electrically connected, it is not volcanic vents that are seen. Galileo mission specialists were amazed when they discovered that Io’s volcanic plumes also emit ultraviolet light, a characteristic of electric arcs. Most of Io’s caldera are located between 30 degrees and 60 degrees farther east than internal heating predicts, which indicates that something is missing in conventional understanding of Io. Rather than orbital resonance between Io, Ganymede and Europa, its heat is not generated internally, but externally.

According to a recent press release, “magma waves” are seen in a caldera on Io called, Loki Patera, a 200-kilometer-wide crater. Loki Patera is known to periodically brighten, as telescope observations since the 1970s reveal. Temperature readings confirm that increased ultraviolet energy is emitted during brightening phases, suggesting to planetary scientists that cool magma in the caldera is “recycled” with hotter material from below the surface, generating waves in its upper layers.

As the press release states, their temperature readings indicate two waves moving in opposite directions. Julie Rathbun from the Planetary Science Institute wrote:

“It’s a giant bowl of molten rock; it should all be behaving the same. But having two waves suggests there are compositional differences within the lake, and that’s strange.”

Again, “strange” is the word of the day in the minds of astrophysicists. Variable physical events are not strange when Io’s electrical connection with Jupiter is considered. The dimming and brightening in Loki Patera occurs in a timeframe that is almost identical with the speed of Jupiter’s rotation, approximately ten hours. Since Io is heated by electromagnetic induction and not by so-called “tidal kneading”, that time-variable condition suggests to Electric Universe advocates that variable electrical input from Jupiter induces the wave formations, as Io travels through Jupiter’s magnetosphere.