Home Picture of the Day Pole to Pole 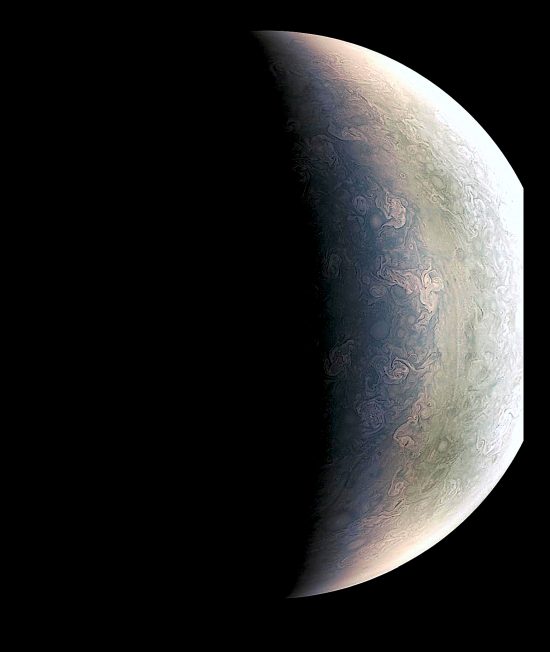 Editor’s note: The Picture of the Day is off today. Please enjoy this article from the archives.

After an August 5, 2011 launch, and a five-year flight, the Juno spacecraft entered orbit around Jupiter on July 4, 2016. Jupiter is the largest planet, with an equatorial diameter of 142,984 kilometers. it is so large that all of the other planets could fit comfortably inside. Jupiter rotates in 9.925 hours, causing its diameter to be 9275 kilometers more than the distance between its poles.

There are radiation belts around Jupiter, similar to the Van Allen radiation belts that surround Earth, except they are thousands of times greater in strength and extent. Juno’s sensitive electronics are enclosed within a titanium shell, so that the energetic particles trapped around Jupiter will not interfere with its systems.

The most energetic of the particles surrounding Jupiter are electrons that radiate in radio frequencies. This led to the discovery that Jupiter has a magnetic field. Electric Universe pioneer, Immanuel Velikovsky predicted the gas giant’s magnetic field in October 1953, as well as its powerful radio broadcast. Those phenomena are due to Jupiter’s magnetosphere, which extends outward for nearly 650 million kilometers, beyond Saturn’s orbit.

Jupiter’s rings are also electrical structures, formed out of a thin sheet of material encircling the planet. The rings are quite diffuse, making observations difficult unless they are in correct alignment with the Sun. The outer radius begins at 129,000 kilometers, almost the same distance as the moon Adrastea. Consensus theories argue that the moons Metis, Adrastea, Amalthea and Thebe influence the structure of Jupiter’s rings in the same way that the “shepherd moons” of Saturn govern the shape of its huge ring formation.

As previously noted, the Galileo spacecraft discovered that the moon Io dissipates electric power greater than 2 trillion watts as it revolves through Jupiter’s electromagnetic fields. The electric charge flow travels along Jupiter’s magnetic field, creating lightning in the planet’s upper atmosphere, as well as intense aurorae at the poles. The Hubble Space Telescope released a video of the aurorae, timed to coincide with Juno’s arrival.

According to Alberto Adriani, part of the the Jovian Infrared Auroral Mapper (JIRAM) team, built by the Italian Space Agency:

“…we knew that the first-ever infrared views of Jupiter’s south pole could reveal the planet’s southern aurora…we see that it appears to be very bright and well-structured.”

The gas giant planets all have rings in some form or another. A plasma torus surrounds each of them and the electric currents flowing along the polar axes and then out the equatorial plane are the likely cause for their persistence. No one knows for sure how planetary ring systems form and are maintained, but electricity flowing through dusty plasma can provide more reasonable explanations. The same holds true for the aurorae that also appear to be part of every planet.