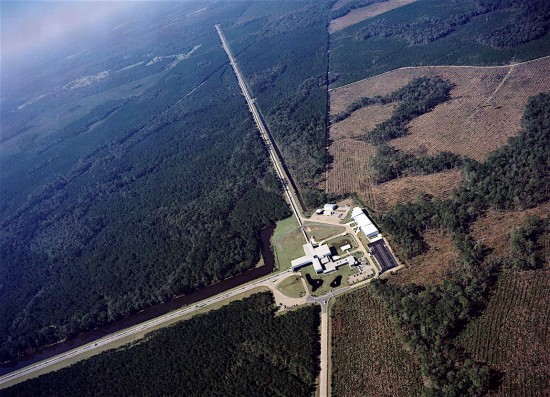 Space and time are not a fabric.

In Einstein’s vision of the Universe, time and space are dynamic regions under constant change because matter creates “warps” or curves in both. Today, its interpretation views the Universe as a kind of geometric object that exists in a four-dimensional matrix: three space coordinates and one time coordinate are necessary in order to define a particle’s “world line” through history.

If the Universe is considered as a whole, with all time and all space contained within a sphere that exists in a higher, five dimensional environment, then all events are there from start to finish. Each event or object traces a line that stretches through reality from past to future, indicating its position in space at every instant of time. This view was originally proposed by Hermann Minkowski, Einstein’s professor at the Zürich Polytechnic.

Minkowski thought that the theory of relativity proved that all objects are really four-dimensional in a framework that is now called “Minkowski spacetime”:

“A point of space at a point of time, that is, a system of values, x, y, x, t [sic], I will call a world-point. The multiplicity of all thinkable x, y, x, t [sic] systems of values we will christen the world… Not to leave a yawning void anywhere, we will imagine that everywhere and everywhen there is something perceptible…Let the variations dx, dy, dz of the space co-ordinates of this substantial point correspond to a time element dt. Then we obtain, as an image, so to speak, of the everlasting career of the substantial point, a curve in the world, a world-line, the points of which can be referred unequivocally to the parameter t from – oo to + oo. The whole universe is seen to resolve itself into similar world-lines, and I would fain anticipate myself by saying that in my opinion physical laws might find their most perfect expression as reciprocal relation, between these world-lines.” [Hermann Minkowski, “Space and Time” in Hendrik A. Lorentz, Albert Einstein, Hermann Minkowski, and Hermann Weyl, The Principle of Relativity: A Collection of Original Memoirs on the Special and General Theory of Relativity]

As mentioned, it is from Minkowski that the spacetime continuum postulate was derived. Such a view causes many problems, but after decades of debate and analysis those problems remain unresolved. For example, there can be no “flow” of time, since all objects in spacetime happen in a perpetual “now”. The Universe must, therefore, be absolutely deterministic, since there is no past or future. From a philosophical standpoint, there can be no free will—every decision, every action, is already extant in its world-line.

“The views of space and time which I wish to lay before you have sprung from the soil of experimental physics, and therein lies their strength. They are radical. Henceforth, space by itself, and time by itself, are doomed to fade away into mere shadows, and only a kind of union of the two will preserve an independent reality.” [Speech given to the 80th Assembly of German Natural Scientists and Physicians, Cologne, September 21, 1908]

All particles are said to be “nested” inside individual distortions of spacetime called warps. The common description of this condition relies on visualizing a sheet of stretched rubber with a bowling ball resting on the surface. The bowling ball forms a dimple in the rubber sheet, supposedly illustrating how the Sun (or some other massive object) creates a “bubble” of distortion in three dimensions.

This information is necessary in order to understand what the Laser Interferometer Gravitational-Wave Observatory (LIGO) is all about. Gravity is not a force in Minkowski spacetime, it is a curvature through a five-dimensional representation. Using the Sun and a rubber sheet analogy, any object approaching the Sun in its dimple will follow a curved path around it. The closer to the Sun, the steeper the curve, therefore the more dramatic its influence on the object. No forces are involved, only spacetime warped by matter. In the four-dimensional Universe, scientists think that the same principle applies: objects follow curved paths because of spacetime distortions.

For more than a hundred years modern science has been on a “quest” to confirm this principle of warped spacetime. In consensus circles, it is assumed that enough matter, with enough density, can create “ripples” in spacetime. Assume some entity, such as a star, with tremendous inertial mass, collapsing at the end of its life into a black hole. One moment it is there and the next moment it is not there. What happens to its dimple in spacetime? This is where gravitational waves come into play.

As the star leaves the continuum (the laws of physics, including GR are not applicable to black holes, so there is no way to describe them in Minkowski spacetime except to say that they can no longer communicate in any way with the continuum), its dimple also collapses. If the bottom of a body of water suddenly drops, it causes the water’s surface to ripple, forming waves that spread out from the center. That is the principle of gravity waves: inertial mass collapse (not matter, mass) in a four dimensional bubble of spacetime. The entire continuum vibrates, as the idea suggests.

LIGO is said to measure ripples instigated by the vibration in spacetime as they pass through the Earth. What effect are those ripples supposed to cause? An expansion of the planet smaller than one-ten-thousandth the diameter of a proton (10^-19 meters). In the case of LIGO, it is not the birth of a black hole, but the merger of two black holes that is thought to have formed the signal that it detected.

It is not the intent of this paper to prove or disprove the existence of black holes. That was done numerous times, especially in presentations given by Stephen Crothers. It is imperative, however, to understand what is going on in the minds of theoretical physicists. It is assumption upon assumption, building theories on the backs of other theories that can provide no experimental evidence. LIGO is not announcing some new principle of physics, it is announcing the confirmation of computer models fashioned according to presumptions. If black holes do not exist, there is no gravitational wave detection.

Seismic noise is a problem because the detector is near an interstate highway and a rail line. When trains went by, the interferometer was knocked out. Nearby logging is also a continuing problem. The team claims that dampening and filtering systems solved those issues. The laser mirrors deteriorated, requiring two of them to be removed and replaced. Wasps made nests in the beam tubes. Their waste caused a leak in the vacuum system. The wasps were evicted. The point here is that LIGO is a device concept that is rife with potentially fatal flaws. Were all of those flaws, as well as others fully rectified?

The major premise is that black holes do not exist, despite the logical fallacy that claims they do.