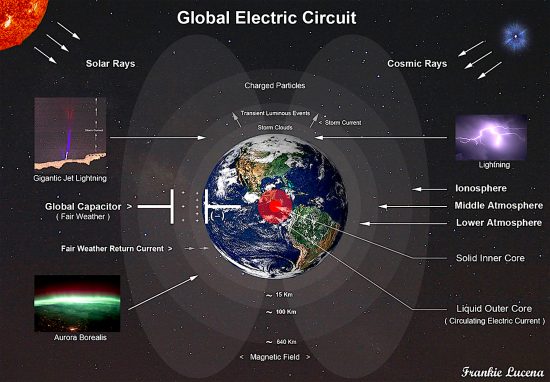 NASA launched the four Magnetospheric Multiscale Satellites on March 12, 2015. Their primary mission includes studying the magnetic field around Earth, especially what mainstream astrophysicists call “magnetic reconnection”. The theory states that electromagnetic fields can break, cross and then “reconnect” through some unknown mechanism. They then “explode”, releasing large quantities of heat and light. Earth’s aurorae, in particular, are thought to be energized through that process. The problems with the theory are not the topic of this paper. Suffice to say, Electric Universe advocates do not accept the idea that there are “lines” of magnetism in the first place. Magnetic fields exist as a continuum, so there are no discrete artifacts.

The MMS constellation, as well as others scheduled for launch before the end of the decade (the Geospace Electrodynamic Connections mission and the Magnetospheric Constellation missions), are part of a widespread, international consortium known as the Global Electric Circuit Project.

MMS joined the TIMED mission (launched in 2001), currently analyzing solar influences on Earth in the area close to 100 kilometers in altitude, especially the Mesosphere and Lower Thermosphere/Ionosphere (MLTI). The upper reaches of Earth’s atmosphere are not well understood, especially the thermosphere. It is there that solar energy, in the form of charged particles, interacts with atmospheric particles. How that relationship works continues to be investigated, however TIMED detected a tenfold decline in the thermosphere’s temperature since 2002, during solar minimum.

Temperatures in the thermosphere are the result of solar radiation. Ultraviolet light is absorbed by residual atmospheric oxygen, becoming electrically charged, along with increased molecular motion. Molecular motion is known as heat, so, although a household thermometer would register temperatures below zero in the thermosphere, it is considered hot; over1500 Celsius during solar maximum.

In the atmosphere, electric currents are collectively called the Global Electric Circuit. Lightning, for example, is not an isolated event, it is part of a relationship that includes all levels of the atmosphere. As written previously, there is an electrical potential of nearly 500,000 volts between the ground and the ionosphere. That circuit is active even without thunderstorms, creating what is called Earths “fair weather field”, generating two picoamps from every square meter of ground.

The 22 year solar cycle influences Earth’s environment, because Earth is part of a circuit in the Solar System, with the Sun as the primary electrode. Although solar energy varies over time, corresponding with sunspot cycles, that variance amounts to less than one-tenth of one percent. As mentioned, electricity from space is injected into the thermosphere along massive Birkeland currents. When solar winds are at a minimum, the electric currents decline in amperage, thereby decreasing the strength of Earth’s magnetosphere.

As the magnetosphere declines in strength, it is less able to deflect energetic ions arriving from deep space known as cosmic rays. Cosmic rays are charge carriers, and those ions are able to reach the troposphere. Collisions between charged and neutral particles drag air molecules along with them influencing low level cloud cover. More clouds reflect more radiation from the Sun back to space—clouds are white because they are acting like mirrors to all forms of visible light. More reflection means less solar energy, more cloud cover, and so on.

Solar maximum is now considered to be over, and the Sun is returning to a more passive state. The correspondence between the Sun’s electric field strength, cosmic rays, Earth’s magnetosphere, cloud cover, and climate are continuing to be investigated.