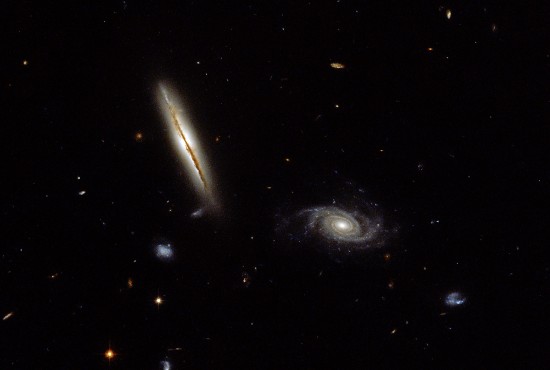 Synchrotron radiation from a galactic core.

A recent press release from the Hubble Space Telescope announces that the spiral galaxy LO95 0313-192 is ejecting a light-years long jet of material that emits intense radio waves, producing lobate clouds above and below the galactic nucleus. Astronomical theories state that its radio-bright nucleus, as well as the jet, come from the compression of interstellar material as it is drawn into a central black hole.

Conventional theories rely on gravity and acceleration for radiation to be produced in space. Compressing hydrogen gas and dust is supposed to create enough heat that temperatures in the millions of degrees are said to make gas and dust glow brightly and emit radiation, including radio noise.

Electric charge surges out along galactic spin axes, forming double layers that, like those in LO95 0313-192, can be seen as radio “lobes.” Electric charge spreads out around the galactic circumference, flowing back to the core along the spiral arms. Since the elements in a galactic circuit radiate energy, that energetic radiance shows that they are powered by larger circuits. The extent of the larger circuits may be traced by radio telescopes by the polarized emissions coming from them.

For example, twin lobes of gamma rays in an hourglass shape extend axially beyond the Milky Way’s central bulge. Each structure measures approximately 65,000 light-years in diameter.

Plasma physicists are familiar with hourglass shapes. The infundibular formations are an unmistakable signature of Birkeland currents squeezing plasma and charged dust into z-pinch compression zones. The intense magnetic fields associated with Birkeland current filaments cause electrons to accelerate with velocities close to light speed. Those excited electrons emit synchrotron radiation, the principle source for radiation in space.

Electric Universe advocates have long known that radio lobes far above the poles of active galaxies are the signature of Birkeland currents. In the case of LO95 0313-192, partial field-aligned ring currents extend out from the galaxy’s core.

The fact that moving charges generate an electromagnetic field has been known since the days of Michael Faraday. However, a lack of appropriate training often means a lack of vision. As previously stated, moving charged particles constitute an electric current, and that current is wrapped in a magnetic field. When more charged particles accelerate in the same direction, the field gets stronger.

Double layers can expand and explode, throwing off plasma. Jets from opposite poles of a galaxy end in energetic clouds emitting X-ray frequencies, or radio waves. Those phenomena are based in plasma science and not gas kinetics, gravity, or particle physics. Astrophysicists see magnetic fields but not the underlying electric circuits, so they are at a loss to explain them.

Plasma’s behavior is governed by those circuits. Double layers with large voltages between them often exist. The electric forces in double layers are incomparably stronger than gravity, broadcasting radio waves over a wide range of frequencies. Most significant to the Hubble bulletin, they can accelerate charged particles to extreme energies.

The Universe is coupled to and driven by circuits at ever larger scales, so electrons and other ions accelerated through intense electric fields radiate in many bandwidths.