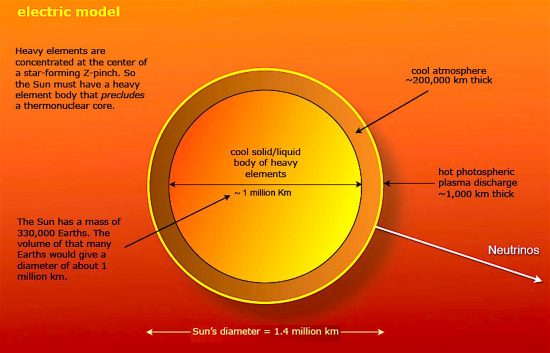 The Electric Sun. The electric field of the Sun, though imperceptible in terms of volts per meter, is sufficient to sustain a powerful drift current across interplanetary space.

Heliophysicists believe that there is an electric dynamo inside the Sun. Two forces are conventionally thought to power it. One is the stretching of magnetic fields due to the Sun’s rotation (change in rotation rate), caused by differences in latitude. The other force is a “twisting” of those magnetic fields because of structures rising up from the Sun’s interior. The former is called “the omega effect” and the latter is called “the alpha effect”.

Stars shine because electricity flows through each galaxy. As mentioned many times, stars can be thought of as giant spheres of slow-motion lightning. It is this simple hypothesis that best matches observational evidence. Any fusion takes place on the surface of an electric star like the Sun and not “deep in its core.” Electricity flowing through the solar plasma creates the Sun’s dynamic magnetic field, so no convective regions, transition zones, or alpha and omega effects are required.

In the consensus view, the electrical environment in and around the Sun is commonly ignored, if it is even acknowledged to exist. The Sun is thought to be a swirling cauldron of fluid dynamic interactions in “hot gas”. The various plasmas (mostly hydrogen and helium), and the way that they behave, are not seen in an electrical context, but rather, in one of intense gravity. According to scientists, “…the magnetic fields on the visible surface and gigantic plasma currents, bubbling up from the star’s interior…” are responsible for variations in the Sun’s output.

Granulation, in their view, is due to hot plasmas from within the Sun, except that the plasmas act like “a boiling teapot” in their models. The plasma is “roiling”, or rising and falling, so that is what they believe forms the granular photosphere phenomenon.

As written in other Pictures of the Day, the Sun is a positively charged electrode in a circuit that is connected to a negatively charged electrode far beyond the planetary orbits. The electric model sees all solar activity resulting from fluctuations in electric power coming from the Milky Way. Ubiquitous, low density Birkeland current filaments move through the Solar System, supplying more or less power to the solar electric circuit in the form of electron drift toward the Sun.

A principle of Electronic Sun theory is the aforementioned “granulation”. Except, in the electrical proposal, it is where dense anode tufting is seen. Since the photosphere can be compared to a discharge tube’s positive electric terminal, events similar to those seen in a neon lamp will be observed, such as hotter and brighter areas. When electric charge density exceeds the containment ability of the anode surface, a secondary plasma forms. That is the aforementioned anode tufting. The characteristic pattern of granulation on the Sun forms because tufts are packed together so tightly.

The strength of electric charge flow into the Sun creates variations in the Sun’s electromagnetic fields. Solar plasmas, therefore, react to those changing fields. The Sun is connected to the galaxy by Birkeland currents, so its “chaotic” characteristics are due to fluctuations in electricity arriving from the Milky Way. The Sun is an externally powered glow-mode electrode, with its energy focused from outside and not expelled from inside. An electric field is the Sun’s ordering factor, so variability in that field makes it a variable star.