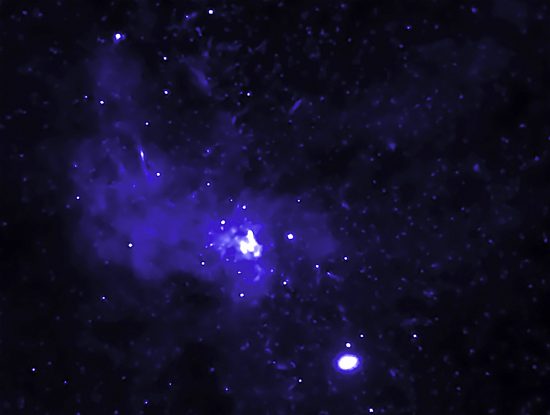 X-rays from galactic cores are accelerated by electric fields.

Rather than accepting electric fields as a source, astronomers prefer to think of “strong winds blowing” out of the galaxy’s core. Often called “Ultra-Luminous X-ray sources” (ULX), they are points across the sky more powerful than a million stars. They are “mysterious”, since, if they were generated by normal stars, their energetic processes would tear the stars apart. So, black holes are invoked to “explain” the observations.

According to a recent press release, astrophysicists discovered “…a dozen black holes gathered around Sagittarius A*, the supermassive black hole in the center of the Milky Way Galaxy.” It should be noted, however, that they did not observe the putative black holes. Instead, they “…turned to archival data from the Chandra X-ray Observatory…” and then extrapolated the data based on their ideas. Lo and behold, they observed what they expected to see.

Astronomers think that the center of the Milky Way contains regions where gas and dust are much more dense than surrounding space, so there is more there to make giant, blue-white stars that live fast, die young and explode into supernovae. Since they are so large, the gravity from such supernova remnants is said to collapse them into black holes. Standard Theory suggests that gas is heated by X-ray bursts from the supermassive black hole in the galaxy’s core, whereupon it is ejected along a tangential trajectory at an average velocity of 1.6 million kilometers per hour.

Along with the black hole in the core, the article states that it holds many smaller black holes in a kind of gravitational vise. Spectrographic readings indicate temperatures many times hotter than the Sun. It is important to remember, though, that X-rays in space are not created by gravity, regardless of their strength. Charged particles, accelerated by electric currents, spiral in electromagnetic fields and shine in all high energy frequencies, extreme ultraviolet, X-rays, and sometimes gamma rays.

No gas in space can be heated until it gives off X-rays and “blows like a wind”. No gas can remain intact at such temperatures because electrons are stripped from the nuclei, causing it to become ionized plasma. In galactic circuits, power flows inward along the spiral arms where it is concentrated and stored in the central plasmoid, or galactic bulge. When it reaches a certain current density it discharges, usually out of a galaxy’s spin axis.

Astronomers believe gravity is their only tool, so no force can stop the collapse of any mass great enough to form a black hole. However, gravity’s effect is so small that it is effectively non-existent when compared to the electric force. Black holes are an inferred phenomenon, since they cannot be detected by any instrument. It is an assumption that matter can be accelerated and compressed by a black hole’s gravity.  It is charge separation that holds stars together, preventing their collapse. Even thermonuclear fires are not needed for a star to “live”. The standard model of stars fails because gravity is the wrong tool.

“Infinity” is all over the work on black holes: infinitely weak gravity is compared to infinitely dense black holes. Such ideas mask the fact that no scientist understands gravity, or how mass is expressed by matter, or how matter expresses gravity. They especially ignore the Electric Universe. Since stars are plasma phenomena, they are governed by electricity and not by gravity, alone.