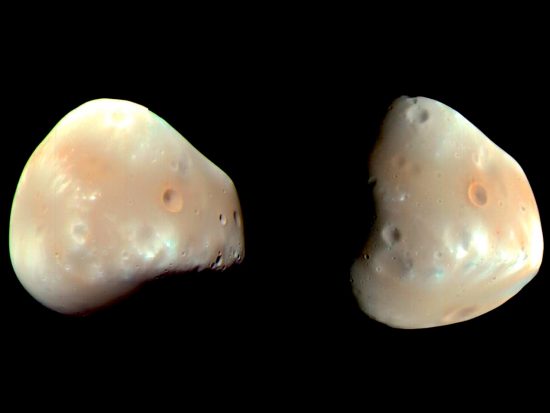 The moons of Mars are scarred worlds.

The two moons of Mars are called Phobos and Deimos, meaning “fear and “panic”. Phobos is extensively studied by Earth-based telescopes and by satellites in Mars orbit. Deimos, however, is so small that major observations are impossible from Earth.

Stickney crater dominates one hemisphere of Phobos. It is a 10-kilometer-wide, 100-meter-deep scar that is supposed to be the result of an impact. Previous Pictures of the Day illustrate the physical problems associated with that theory, since blasting large craters into small bodies ought to disrupt their overall structure. For example, there is a hole in asteroid 253 Mathilde big enough to disintegrate the asteroid, except that it is still there.

Phobos is a mere 28 by 20 kilometers in size, so Stickney crater is nearly half as big as the asteroid-sized moon. Why are both objects intact? Planetary scientists speculate that asteroids (and small moons) are loosely aggregated, similar to a gravel pit. Since the celestial bodies in question were not blown apart, it is thought that they behave like piles of sand, cushioning the shocks.

Since Phobos is about the same size as asteroids Mathilde, Eros and Ida, is there something that can form similar structures without obliterating the objects in the first place? The answer is electricity.

Some astronomers think that fracture lines around Stickney crater prove that the moon underwent severe shock, and that it was distorted on impact. On closer examination, the grooves are chains of small craters, not “fracture lines”. The area around the crater is blunted and smooth, with no large breccias, although the moon is covered with a meter of ultra-fine dust. A recent press release ascribes the furrows to “rolling boulders”, although a telling comment from the article states, “But there’s a problem: we don’t see any boulders on the surface.”

Picture of the Day articles about Mars reveal that millions of cubic kilometers of rock and dust were blasted out of the planet, reaching escape velocity. Stone blocks larger than Manhattan Island also fell back to Mars from a great height, which explains the fields of boulders with sharp edges covering thousands of square kilometers.

The electrical history of the solar system includes intensely energetic events and violent interactions. Plasma discharges excavated surface depressions, scooped out material and then blasted it into space, leaving cleanly cut features. The lightning bolts that carved Mars threw large chunks of its crust into orbit. The result was that Phobos and the aforementioned asteroids are covered in dust, and are defined by huge craters that look half-melted.

Phobos and Deimos are the remnants of a catastrophic event that electrically devastated Mars.