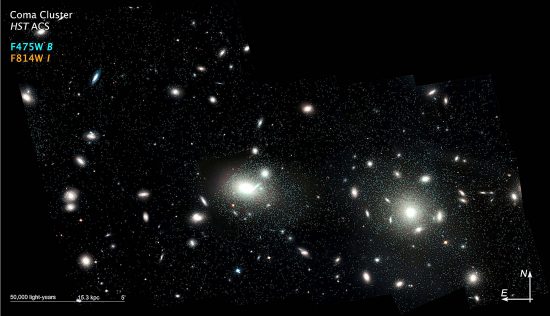 Globular clusters are an example of how plasma is organized and confined into formations that are difficult to explain. Astronomers believe that globular clusters begin as groups of stars from a single birthing event. According to standard theory, gas and dust needed for new stars is no longer present inside the spheres, so there is no expectation for continuous star birth.

Spherical clusters of stars pose a difficult question when gravitational models of the cosmos are considered. Why do they congregate into giant balls, rather than in disks or ellipses? Also, stellar orbits inside the clusters should gradually cause them to disappear over time if their stars are attracted to one another through gravity alone. Some stars should be accelerated out of the cluster, while stars closer to the center should be drawn farther inside.

As noted in previous Pictures of the Day, globular clusters orbit galaxies in haloes. Since they are presumed to cross the galactic plane during their travels, tidal forces should disrupt them, sending their stars every which way. Why this does not happen is not explained. They are supposed to be hundreds of millions of years old, yet they remain spherical despite crossing a parent galaxy’s gravitational boundary many times.

In an Electric Universe, stars are positively charged objects bound together by electric and magnetic fields, so their interactions with each other are not based on a gravity, alone. As Dr. Donald Scott, retired Professor of Electrical Engineering and advocate of the electric star model stresses, it is the strength of the electric charges flowing into a star that determines its characteristics. The old-fashioned Nebular Hypothesis is inadequate when it comes to analyzing a star’s behavior in galactic formations or globular clusters.

Electrically, individual stars might be considered as discrete charged particles in both structures, behaving according to the laws of plasma physics and not the laws of mechanical motion. Galactic disks act like Faraday motors, while globular clusters (as has been suggested in the past) might be more like ball lightning.

So, stars in globular clusters are acting in accord with their electrical natures. They may not be as old as conventionally thought, because they are not behaving according to gravity in a big bang cosmology but according to a plasma cosmology hypothesis.