Home Picture of the Day Swimming in a Cosmic Sea

Swimming in a Cosmic Sea 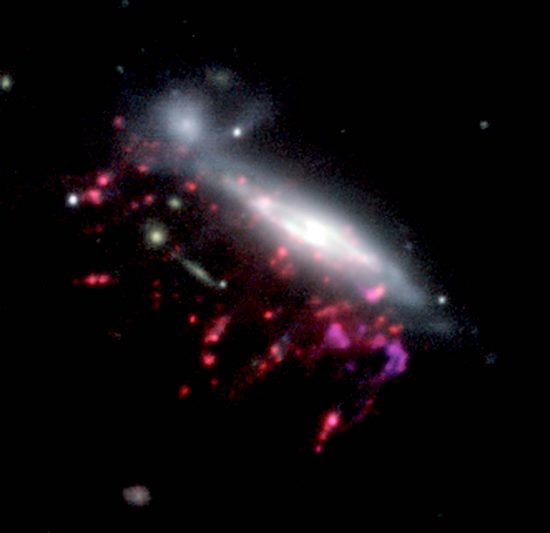 Birkeland currents are a better model than gravity.

Among astronomers, it is commonly thought that the vast majority of observable galaxies hide “supermassive black holes” (SMBH) within their cores. SMBHs contain up to a billion times more mass than putative stellar black holes, and it is that phenomenon that is said to drive galactic rotation, as well as collimated jets of matter that are seen blasting out from their axes for thousands of light-years.

According to a recent press release, so-called “jellyfish galaxies” are observed in galaxy clusters, with multiple filaments that might be “feeding” material into SMBHs by “ram pressure”. As galaxies accelerate into a cluster’s central mass, “blow-back force” is said to push the tendrils of gas and dust out and away. For example, the research team thinks that JW100 might be affected by ram pressure as it “crashes into the center” of its home cluster. They believe that friction from the cluster’s hot gases and dust scraping against each other strips material off JW100, forming hot filaments.

Most of the filaments contain groups of stars enclosed by glowing, ionized shells. Other astronomers refer to those rapidly moving star cluster knots as “fireballs”, because they look like flaming projectiles shooting out from galaxies.

Previous Picture of the Day articles mention that energetic galactic emissions are conventionally ascribed to shock waves, collisions and other kinetic effects initiated by gravity. Most theories rely on gravity and acceleration for the production of gamma rays, X-rays and extreme ultraviolet light in space. Hydrogen gas compression is supposed to transfer enough momentum that temperatures in the millions of Kelvin are created.

In an Electric Universe, active energy sources, with associated jet-like formations, are due to a phenomenon known as Birkeland currents. Tendrils extending from active radio galaxies, to “radio lobes” far above their poles, are the signature of Birkeland currents that carry electrical energy through vast cosmic circuits. Those circuits generate magnetic fields that can be mapped, indicating their extent. Since every element in galactic circuits radiate energy, they must be powered by coupling to ever larger circuits. The size of those larger circuits is known, because galaxies occur in strings.

Conventional cosmology demands that gravity is the dominant force in the Universe. Any anomalous observations are forced into that theoretical framework, or consigned to the “mysterious” realm: scientific papers are filled with statements that express “puzzlement” from “unexpected results”. Galactic jets, such as the “jellyfish” tendrils from JW100, are puzzling to astronomers who do not know if an SMBH causes them or if they cause the SMBH.

There is no direct evidence that matter can be compressed to nearly infinite density. Instead, z-pinches in plasma create plasmoids that energize stars and galaxies. When charge density is too high, double layers form, catastrophically releasing their excess energy in bursts of X-rays, flares of ultraviolet light, or electromagnetically confined ionized particles that burst from galaxy cores like flashes of lightning. Pinched electric filaments remain coherent over long distances, spiraling around each other, forming helical Birkeland currents that can transmit power through space. Those are the filaments seen in jellyfish galaxies.