Home Picture of the Day Not Gas 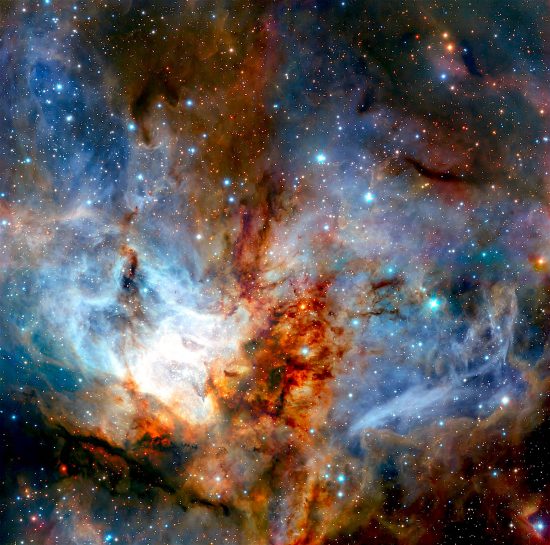 As written in previous Pictures of the Day, plasma behavior is unfamiliar. It is sometimes difficult to see the differences between plasma and a gas. Plasma’s similarities to gas are overshadowed by its failure to correspond with gas kinetics. Since the light frequencies from planetary nebulae are in the ionized oxygen range, they should be thought of as discharge phenomena and not hot balls of gas.

In every science journal, the behavior of planetary nebulae, like RCW 38, usually involves gases and dust “blowing” through them, as well as “winds” created by “shock waves” from exploding stars. Nebulae are sometimes described as “star forming”, because X-rays and extreme ultraviolet indicate to consensus astronomers that new thermonuclear fusion reactions are taking place within the cloud.

The Electric Universe sees things differently. Plasma flows through space, not gas. The physics of electric currents apply, not the physics of winds. Inside planetary nebulae are one or more plasma sheaths, or “double layers”, acting like capacitors, because charge flow alternately increases and decreases within the sheaths.

Since charged particles in motion are an electric current, the ionized material within RCW 38 is modulated by that electrical influence, causing the formation of filamentary structures. Electric currents are always accompanied by magnetic fields that wrap around the current channel. An electric current filament in plasma can form a double layer along its axis. Positive charge builds up on one side and negative charge on the other side of a double layer. A strong electric field exists between the layers, and if enough current is applied, the double layer glows, but otherwise it is detectable by its emission of radio noise. Double layers and current filaments form in the circuits that thread through the galaxy. They are mostly invisible because of their low charge density, but their magnetic fields can be mapped by radio telescopes.

A neon lamp is a more correct model for nebulae.