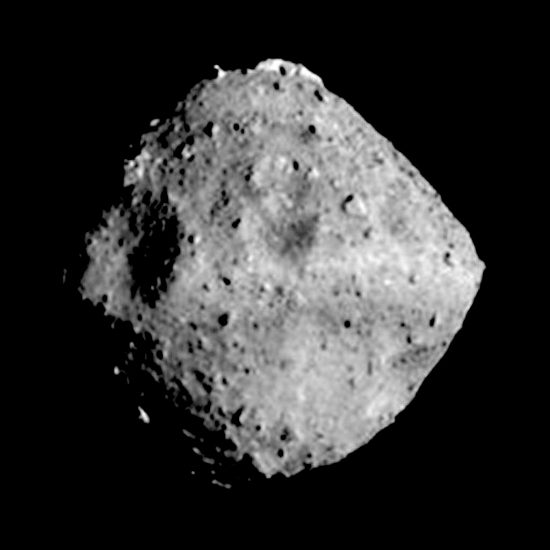 Most asteroids are presumed to be loosely compacted “rubble piles”.

On December 3, 2014 the Japan Aerospace Exploration Agency (JAXA) launched Hyabusa 2 from the Tanegashima Space Centre in Japan, on a sample return mission to the near Earth asteroid (NEA), Ryugu. Hyabusa 2 follows on the original Hyabusa mission to asteroid Itokawa. After some mission hiccups, Hyabusa eventually returned a sample of Itokawa to Japanese space scientists.

During its 18 month stay orbiting Ryugu, Hyabusa 2 will deploy landers to the surface, including rovers and an instrument assembly called MASCOT (Mobile Asteroid Surface Scout). Using its four instruments, MASCOT will analyze the regolith at two different sites. Hayabusa 2 will collect the soil samples and return them to Earth near the end of 2020. Hyabusa 2 will also send a copper projectile close to the asteroid’s surface. Then, after moving to a safe distance, an explosive charge will drive the projectile into the asteroid. The orbiter will then collect the dust and gas ejected by the explosion.

Astrophysicists are trying to explain various mass anomalies in asteroid crater studies, along with what appears to be “regolith migration” on asteroids like Itokawa and Eros. Gravity is minute on asteroids, so banding, landslides, and layering are thought to be from meteor impacts “shaking” them. Over long periods of time, shaking is thought to sort the materials by size and density in the same way that a jar of sand and pebbles will sort itself when it is shaken.

Some asteroids, like Vesta, have craters so large that they should have been shattered into fragments when they were hit. Vesta is only 520 kilometers wide, but possesses a crater 460 kilometers in diameter. The only gravity-based model of asteroid behavior available sees them as big sand piles, absorbing impacts without shattering.

The electric model of asteroid formation, on the other hand, does not require one object to crash into another for there to be craters. Electric arcs can cut surfaces and then accelerate material into space, leaving deep pits and chaotic topography. The effect is commonly called electric discharge machining (EDM).

Planetary scientists are interested in the environments around asteroids, because they are speculating about a manned-mission to one of the larger ones. They are studying various bodies to see if their electrical activity will be a problem for astronauts. In fact, the Osiris-Rex mission to Asteroid Bennu is scheduled to arrive in August 2018. It will attempt to “grab” samples from Bennu, as well as analyze its electromagnetic fields, most likely beginning its return journey back to Earth in March 2021, while its sample capsule should land on Earth on September 24, 2023.

Asteroid composition and formation estimates are based on cratering. Images of asteroids 253 Mathilde, 243 Ida, and 433 Eros reveal craters large and small, prompting scientists to speculate that they are really loose conglomerations of rocks and soil, rather like a big gravel pit in space, because “…they were not blown apart…” from meteoric impacts. Does the gravel pit hypothesis fit the facts?

At the outset, however, planetary scientists exclude any electrical explanation – which rectifies the anomalies in other theories – because they know almost nothing about the forces involved except to parrot: “if there’s electricity in space it doesn’t do anything.” It never occurs to them that electricity can create the very things they now struggle to understand.