Home Picture of the Day Newbie 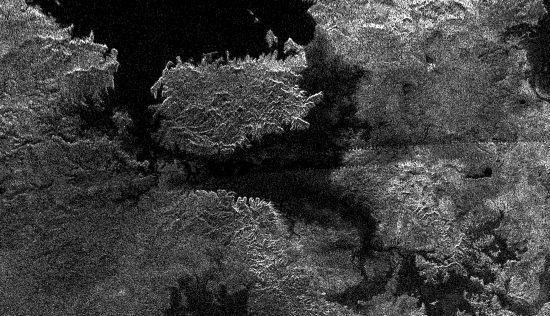 Titan could be a youthful object.

The wine of youth does not always clear with advancing years; sometimes it grows turbid.
— Carl Jung

Planetary scientists maintain that Titan’s nitrogen and methane atmosphere must be constantly replenished, because ultraviolet light from the distant Sun dissociates gas molecules. Theories about how the Solar System formed suggest that its atmosphere should have disappeared long ago. That idea led astrophysicists to imagine the evaporation of “liquid methane lakes” sustaining its dense clouds.

However, when the Huygens lander touched down on a flat, rock-strewn plain no methane rain was detected, and no hydrocarbon pools existed anywhere nearby. Instead, Titan exhibited a dry surface. Images revealed a rocky landscape with a sandy consistency, and a field of small, water-ice pebbles at a temperature of -179 Celsius. Huygens did not detect any liquids.

Cassini’s observations of so-called “riverbeds” were, in reality, dark, flat channels, with no evidence of flowing liquids. Similar rilles are present on the Moon. Electric Universe theory proposes that such “sinuous rilles” are scars left by plasma discharges of immense proportions. Every body in the Solar System, other than the gas giant planets and some moons, are home to rille structures. Without exception, there are steep-walled, meandering, flat-floored canyon formations everywhere.

Wal Thornhill observed that Cassini’s images of Titan are:

“…typical of arc machining of the surface. I would compare them directly to the scalloped scarring on Jupiter’s moon Io and the flat, melted floor depressions that result. Such floors would be expected to give a dark radar return.”

The aforementioned “lakes” are near vast dune fields in Titan’s southern and northern latitudes. However, rather than liquid, there is a distinct probability that infrared reflections detected by Cassini bounced off a hard, glassified crust left by an interplanetary plasma discharge.

That the Solar System was the scene of catastrophic encounters between charged bodies in the recent past is a principle tenet of Electric Universe theory. Electric fields and their associated lightning bolts caused orbital variations and geological upheavals among planets and moons. Cometary bodies scaling down in size from something as big as Venus to particles in Saturn’s rings, might be forensic evidence for those events.

Based on the presupposition that those ideas have merit, and that Venus could be a new addition to the Solar System, why not apply the same theory to Titan? If Titan is a relatively new addition to Saturn’s system of some 60 moons, then the fact of its methane atmosphere does not indicate replenishment, but youth.

If, like Venus, Titan is not a wizened denizen of an even more ancient Solar System, but, instead, is a new member of a remodeled system, then new ways of describing it must be considered.

“We must therefore allow that Venus and Titan may both have new surfaces if planets and moons are not formed through accretion by impacts billions of years ago. The ‘befuddlement’ and ‘mystery’ may prove to be the result of an unquestioned belief in that [billions-of-years-ago] hypothesis. Predictions based on that story have had no success in the space age. So we may be confident that planets did not accrete from a solar nebula.”

Those concepts are never reported in the conventional press. If they do come up in a comments section or a blog, they are mocked or banned. Although, when the time for changes in thought arrives, those changes are inevitable. When reasonable people apply elements of electrical theory to observations that otherwise provoke confusion, there will be more clarity of perception. Observations do not create new theories, observations are inserted into theories.

Electric Universe theory establishes a more comprehensive picture when data from space probes and telescopes are inserted into it. It is not considered viable in consensus circles due to its timeframe. Among its opponents is the foregone conclusion that the Solar System is as it was since it formed billions of years ago. To consider a reordering less than 10,000 years ago is blasphemy. Fortunately, it is a well-established pattern that what once was heresy will often evolve into convention.