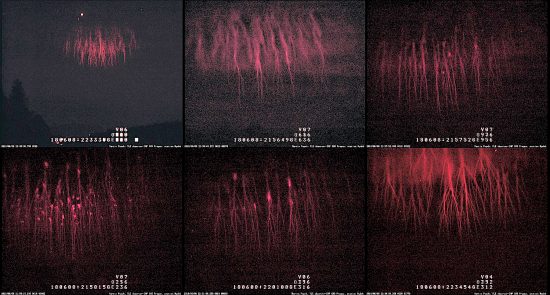 Thunderstorms act like particle accelerators, launching massive discharges downward to the ground and upward to space.

Earth is an electrically charged object: it maintains an electric field at its surface between 50 and 200 volts per meter: for every meter above the ground the voltage increases. As previously written, the electric field beneath thunderstorms can increase to 10,000 volts per meter, because thunderstorms and Earth act like the plates of a capacitor, storing electric charge. Charged particles are drawn toward the storm, pulling neutral air molecules along. This process creates updrafts that can rise into the stratosphere. Once accumulated electric charge reaches a breakdown point, it discharges as a lightning bolt.

Geophysicists are beginning to realize that sprites (and other phenomena like “blue jets“) are part of every moderate to large storm system, and are an essential component in Earth’s electric circuit.

From an Electric Universe perspective, these phenomena are manifestations of electricity pouring into plasma double layers. Double layers can accelerate charged particles up to enormous energies in a variety of frequencies, forming “plasma beams”. Double layers dissipate when they accelerate particles, so there must be an external power source supplying them with electric charge, such as Birkeland currents, described many times in these pages. If charge density becomes excessive, double layers can explode, drawing electricity from an entire circuit. Nobel laureate Hannes Alfvén maintained that double layers are unique, and that intense energy sources on Earth and in space could be due to double layers “shorting out” and exploding.

Usually, it is the negative charge, although some powerful lightning bolts begin with positively charged leader strokes. An electric circuit between the clouds and the ground is completed when the two connect, allowing a burst of electric charge to flash along a conductive pathway. It is the “return stroke”, though, that contains the greatest electric charge in lightning, delivering enormous power in a few milliseconds. Optimum conditions in Earth’s atmosphere enable the formation of those particle accelerators above the clouds. When sufficient charge builds-up, those conditions generate discharge events between cloud tops and the mesosphere.

According to a recent press release, observers reported red sprite “jellyfish” with their heads cut off. It is not so surprising that the sprites could have cut-off heads. Since double layer boundaries are sharply defined, any discharge within the atmospheric/ground capacitor plates could be limited in its “head room”. Therefore, the double layer boundary is a limiter to how high a discharge can propagate.