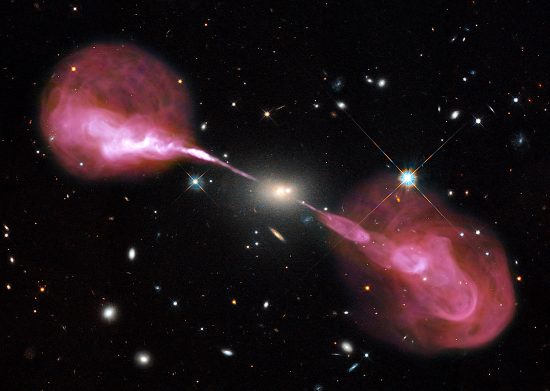 Galaxy 3C 348, or Hercules A, is said to be home to an active galactic nucleus, along with its pronounced radio jets. Visible light image superposed with a radio image. Credit: NASA, ESA, S. Baum and C. O’Dea (RIT), R. Perley and W. Cotton (NRAO/AUI/NSF), and the Hubble Heritage Team (STScI/AURA).

What are those powerful engines?

Black holes are the topic of many Picture of the Day articles, because they are so often used to “explain” anomalous or extreme phenomena in space. They exist only through some mathematical legerdemain, and have nothing to do with the substantive Universe for the simple reason that they do not occupy space and time.

Black holes twist and warp space and time so that velocity calculations yield impossible solutions. Standard theories suggest that matter inside of a black hole occupies no volume at all, yet retains gravitational acceleration so great that not even light can escape its attraction—thus they are “black” holes because they cannot be detected with optical telescopes. Although they are impossible to observe directly, over 90% of galaxies in the Universe are supposed to harbor those arithmetical monsters.

When matter from stars in orbit around the galactic core collects around the central black hole it forms an “accretion disk”, where astrophysicists say that its angular momentum is so great that it heats up to temperatures in excess of 10 million Kelvin. That fast, hot stellar material is supposed to generate X-rays. However, 3C 348 possesses another structure that is not readily explicable with black hole physics: a bipolar jet. Explaining the jets of ionized particles seen emanating from various objects in space is one of the most difficult tasks facing modern astronomy. What force creates energetic particle beams spanning light-years? What confines them into narrow filaments?

The prevailing theory of “compact gravitational point sources” inside active galactic nuclei (AGN) heating gas and dust in an accretion disk does not address collimated jets. Only one force can hold such a structure together: magnetism. The only way to generate the magnetic fields necessary for bipolar jets is with electricity flowing through space.

The two lobes of 3C 348’s radio jet are a cone of plasma viewed from the side. They illustrate a galaxy scale dense plasma focus or “plasma gun”. Surrounding the central bulge is what should more properly be called an “expulsion disk” rather than an “accretion disk”. Standard cosmological theories are hard-pressed to match models with observations. X-rays from ion excitation, radio waves, and (sometimes) gamma-rays are all properties of lightning bolts. Since plasma phenomena are scalable over many orders of magnitude; they act the same whether they are in atoms or in galaxies.

The plasma gun effect occurs when an electric current in plasma generates a magnetic field that constricts the flow of charge. The constricted channel is known as a Bennett pinch, or z-pinch. The “pinched” filaments of electric current remain coherent over large distances, spiraling around each other, forming helical structures that can transmit power through space.

Retired Professor of Electrical Engineering Dr. Donald Scott, author of The Electric Sky, wrote about the way plasma acts in the Universe:

“In a laboratory plasma, of course, things happen much more quickly than on, say, galaxy scales, but the phenomena are identical—they obey the same laws of physics. In other words we can make accurate models of cosmic scale plasma behavior in the lab, and generate effects that mimic those observed in space…Electric currents flowing in plasmas produce most of the observed astronomical phenomena that remain inexplicable if we assume gravity and magnetism to be the only forces at work.”