Home Picture of the Day Son of Jupiter 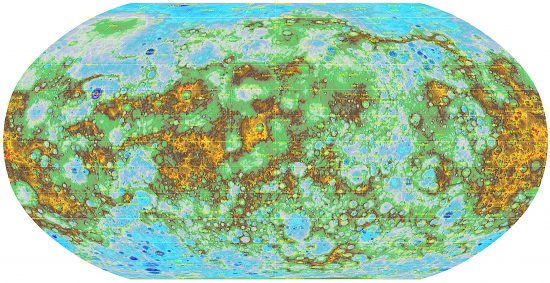 A NASA spacecraft slammed into the surface of Mercury on April 30, 2015.

NASA launched the Mercury Surface, Space Environment, Geochemistry and Ranging (MESSENGER) experiment from Cape Canaveral on August 3, 2004. After traveling nearly eight billion kilometers, the 485 kilogram spacecraft entered orbit around Mercury on March 17, 2011, beginning its scientific mission on March 23, 2011. MESSENGER was a satellite of Mercury for more than four years, until it ran out of maneuvering fuel and was deliberately crashed into the planet on April 30, 2015.

Mercury is a small planet, 4878 kilometers in diameter. The moons, Ganymede and Titan are both larger. Mercury revolves at a mean distance of 57,910,000 kilometers from the Sun, so a year on Mercury lasts 88 days. Since it rotates once every 58.6 days, Mercury completes three rotations for every two orbits.

Mercury possesses a weak magnetic field, but planetary scientists do not know how it is generated. A magnetometer onboard MESSENGER could not resolve the magnetic field’s source. Conventional theories suggest that there is a rotating “dynamo” inside Mercury, although no one understands how a molten core exists, since Mercury appears cold and dead: its molten interior should have cooled off eons ago.

Mercury is also believed to be 75% iron, with a thin shell of silicon-rich rock. Consensus theories cannot explain the abundance of iron: the ratio of iron to silicon is opposite to that of the other rocky planets and moons.

According to a recent press release, Mercury’s crust was estimated to be around 36 kilometers thick. However, as University of Arizona’s Lunar and Planetary Laboratory associate staff scientist Michael Sori believes, its crust is only 26 kilometers thick, but its density is greater than aluminum. The question is, why?

“Maybe it formed closer to a normal planet and maybe a lot of the crust and mantle got stripped away by giant impacts. Another idea is that maybe, when you’re forming so close to the sun, the solar winds blow away a lot of the rock and you get a large core size very early on. There’s not an answer that everyone agrees to yet.”

The conventional theory includes volcanic activity as a formative agent, although there are some theoretical issues with that idea. On Earth, volcanoes sometimes explode because gases like carbon dioxide and volatile compounds like water vapor are dissolved in the magma. Consensus theories state that pressure in magma decreases when it rises to the surface, so those dissolved compounds cause Earth’s crust to “burst like an overinflated balloon”. However, such compounds are only inferred on Mercury, since there is no direct observational evidence of its surface materials. Pyroclastic materials there are said to be similar to those found on the Moon. Since the Moon is thought to have undergone a period when it was in a molten state, with resulting widespread volcanoes, the conclusion is that what is seen on Mercury must also be due to the same process.

The fact that the Moon and Mercury were most likely affected by almost identical forces in their histories is not denied by Electric Universe advocates. What is denied is the way those histories unfolded. The Moon is 3475 kilometers in diameter, while Mercury is 4880 kilometers, but it appears that they both experienced catastrophes at some time in the past.

Pyroclastic vents are evidence for electrical activity. There are domed craters associated with several of them. The burned and blasted appearance is because electric arcs carved them out, leaving asymmetrical depressions, often with fulgurites embedded in their sidewalls. Fulgurites are the fused, sometimes brachiated, “fossils” of lightning bolts impacting a surface, leaving behind a hardened representation of the discharge channel.

When rocky bodies, like Mercury or the Moon, are ejected from larger, highly charged objects, they are bombarded with what can only be described as gigantic lightning bolts. The electric charges between the newly emergent planet or moon and its parent are not in equilibrium, so arcing takes place as they rapidly move away from each other. That is why so many celestial objects in the Solar System are seriously damaged. Craters, canyons, melted plains, scattered fields of scorched debris, and ionically deposited piles of finely divided dust tell the story of violent birth spasms, while providing evidence for familial relationships.