Home Picture of the Day The Deccan Traps 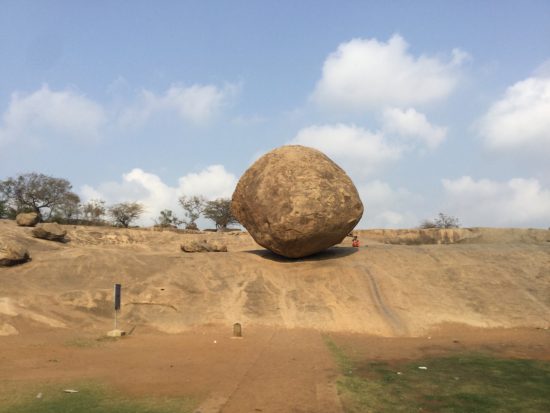 An erratic boulder in the Deccan Traps region of India known as “Krishna’s Butterball”. Photographer unknown.

A wide region of central India is dominated by what geologists call “flood basalts”, because they represent what are thought to be the largest eruptions of magmas ever to occur on Earth. The Deccan Plateau consists of basalt lava more than 2000 meters thick, covering almost 500,000 square kilometers. To put that enormous volume in perspective, it is an area greater then the States of Washington and Oregon, combined. The estimated volume of lava deposits is as high as 512,000 cubic kilometers. In comparison, the eruption of Mount St. Helens in 1980 created a mere one cubic kilometer of material.

“Trap” is Sanskrit, meaning “step”, because of the obvious lava layers. The Deccan Traps do not rise in a gradual slope, but are composed of gigantic blocks that resemble a staircase. Thousands of square kilometers are composed of anomalous terrain, erratic boulders, glassified spherules of stone, Lichtenberg trackways and many other signatures of electrical activity. As written in previous Pictures of the Day, similar structures are located in other regions, Siberia for example.

According to conventional geological theories, the Deccan Traps are the remains of volcanic eruptions that took place at the end of the Permian Age, 250 million years ago. Planetary scientists think it is the largest volcanic eruption in the last 500 million years. A so-called “mantle plume” is thought to be how magma melted the crust and then erupted through the Deccan Craton from as deep as 3000 kilometers. Those plumes are described as “gigantic convection cells” that transfer heat from the core, which is the mechanism thought responsible for plate tectonics.

However, there are too many presumptions in the mantle plume theory. No known mechanism can account for melting of the crust due to phase changes in Earth’s mantle. How did it acquire the excess heat? Under the Deccan Traps, the rock strata is so thick that a plume would not be hot enough to melt it into magma and force it to the surface. The geochemistry of the basalts in the area is also inconsistent with that process. Finally, there is no evidence of uplift – something that should be expected from a mantle plume.

How often does lava “flood”? Current dating methods are not accurate enough to place individual lava flows in a time sequence, so entire fields of flood basalt fit within the margins of error. What did happen to India?

In a previous Picture of the Day, one of the largest astroblemes on Earth, Popigai Crater, was described as a scar created by electric arcs eroding the terrain in multi-trillion-watt pillars of cosmic fire. Rather than the site of a meteorite impact, Popigai, as well as the the majority of large craters, is most likely electrical in origin.

The great 1908 Siberian event that flattened millions of trees was probably the result of an electric arc jumping from a charged object entering the field of Earth’s giant capacitor. Craters could be examples of lightning-type discharges that also threw huge stones—like the one in the image at the top of the page—for hundreds of kilometers, as well as unleashing violent upwellings of magma from deep, melted excavations. This explains the lack of volcanoes anywhere near the Deccan Traps, as well as features like Krishna’s Butterball.

It seems likely that central India was the location of lightning strikes of continental dimension that might have occurred in relatively recent times. The power of those strikes excavated billions of tons of rock and redistributed it all over the world – glass spherules, corresponding to Indian geochemistry, are found as far away as Great Britain. Electric arcs pulled-up the Deccan Plateau and carved its summit with Lichtenberg figures, as well as creating semi-circular, layered mountain ridges that march out from the center for hundreds of kilometers. Unusual geomagnetic anomalies are also found all over the region – an unmistakable sign of electricity flowing through the strata.