Home Picture of the Day Arp 153 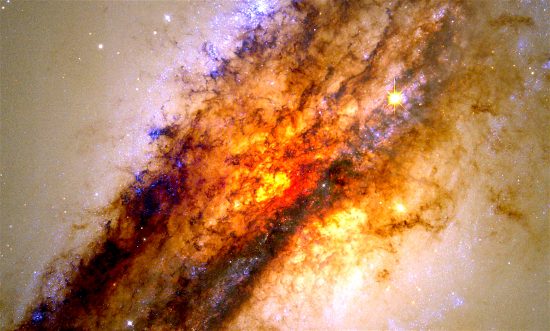 The center band of dust and gas in Arp 153 (A.K.A. Centaurus A) reveals filamentary structures. Credit: E.J. Schreier (STScI), and NASA.

Consensus astronomers rely on ideas about gravity and acceleration for stars and galaxies to produce radiation.

Particles of dust, along with hydrogen gas are said to “jet” out of galactic nuclei, because a central black hole accelerates them to high velocities. When material in a galactic jet encounters regions of increased density, the collisions between particles is said to create temperatures in the millions of Kelvin. That high temperature is thought to make the gas and dust glow brightly and emit radiation.

In an Electric Universe, on the other hand, electric charge surges out along galactic spin axes, forming double layers that, like those in Centaurus A, can be detected in optical and radio wavelengths. The electric charge flow encompasses the galactic circumference. That energetic circuit means that galaxies are powered by external conduits known as Birkeland currents. Since each component of a galactic circuit radiates energy, the extent of the larger circuits can be mapped with radio telescopes because of the polarized radio “noise” they emit.

Centaurus A is one of the first radio sources that revealed “jets and lobes” accelerating out of its nucleus. It was discovered by James Dunlop on August 4, 1826. Dunlop subsequently published, “A Catalogue of Nebulae and Clusters of Stars in the Southern Hemisphere observed in New South Wales” in Philosophical Transactions of the Royal Society, Volume 118, in 1828. Astronomer Halton Arp included Centaurus A in his Atlas of Peculiar Galaxies as Arp 153.

Galactic jets, regardless of their composition, are thought to result from dust and gas falling into a galaxy’s central black hole, where it is ripped apart. Subatomic particles are ejected from galactic cores by some means not understood in consensus circles. It is suggested that they form from spinning magnetic fields that surround said black hole, but the theory can never be tested.

Missing in astronomical observations is that those fields are electromagnetic and not just magnetic. As written in previous Pictures of the Day, the only way to generate magnetic fields is with electric charge flow, or electricity. Radio-bright celestial objects, including jets and lobes, are not created by gravity, no matter how powerful. Laboratory experiments most easily produce them by accelerating charged particles through an electric field. Rather than gravity, an electromagnetic entity called a “plasmoid” is responsible for jets, lobes and other objects in space.

Among the many difficulties faced by mainstream astrophysicists is how magnetic fields can align and compress particle emissions into jets that remain coherent over a million light-years, before they “disperse” into vast clouds of radio-emitting particles, larger than their galactic sources.

The detection of radio sources is indicative of plasma’s behavior in response to electric charge. Bennett pinches (z-pinches) in plasma filaments form plasmoids that can come and go as an electric field varies. Strong electric fields in plasmoids act like particle accelerators. Electrons accelerated to high speeds spiral in electromagnetic fields, emitting radio waves. Radio telescopes confirmed the existence of a plasma-focus plasmoid at the core of the Milky Way, so it should not be surprising that other galaxies exhibit similar structures.