Home Picture of the Day Seeing Through Dirty Lenses 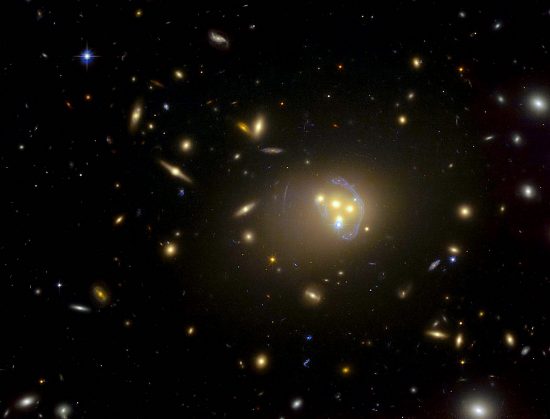 Galaxy cluster Abell 3827. The blue structures are supposed to be caused by “gravitational lensing”. Credit: ESO.

Gravity does not bend light.

Electric Universe theory paints a dubious picture about dark matter. It is an add-on, or ad hoc, theory because Big Bang cosmology is incomplete, always requiring a new prop. The Big Bang is supposed to be what brought all matter and energy, including gravity, into existence.

NASA launched the Planck Mission on May 14, 2009. Onboard the satellite are instruments designed to measure temperature fluctuations in regions of the Universe that seem to be of lower mass. The Big Bang theory does not account for such regions. The initial event was a homogenous irruption, at least, that is what was assumed.

Dark matter is supposed to solve “the gravity problem” in the Universe: there does not appear to be enough baryonic or “normal” matter to account for galaxy formation, or for those galaxies to aggregate into clusters. Galaxy cluster acceleration should not display such wild recessional velocities, some of which exceed 98% of light-speed.

Another issue was galactic structure. Astronomers noticed stars on the edges of spiral galaxies tend to orbit their nuclei with the same angular momentum as stars close to their centers. Newtonian mechanics insists that stars farther away from the center should be moving more slowly, so astronomers assume a gravitational force from dark matter imparts extra velocity to them.

However, astrophysicist Hannes Alfvén came up with an “electric galaxy” theory in 1981. Alfvén was a Nobel laureate who noticed that galaxies resemble homopolar motors. A homopolar motor operates because electric charge flow creates a magnetic field that causes a metal disc to spin at a rate directly proportional to the supplied current.

Galactic discs act like the conductive plates in said homopolar, or “Faraday motors”, named for their inventor, Michael Faraday. Birkeland currents, so often mentioned in these pages, flow into galaxies, powering their stars. Galaxies, in turn, receive power from intergalactic Birkeland currents that are visible in space as filamentary structures. Birkeland currents are drawn toward each other with long-range attraction greater than the force of gravity, so dark matter can be dismissed when electric charge flowing through various plasmas is recognized.

Recently, astronomers reported that they are not so sure about dark matter. Their observations of “gravitational lensing” effects in a distant galaxy cluster now leaves open the question of dark matter interaction. Of course, in an Electric Universe, there is no spatial distortion (lensing), because space is not a substance that can be modified. Space is the stage upon which existence is played-out, but it has no existence in and of itself. It is not a fabric. It cannot be bent or twisted or altered in any way. There is nothing there to change.

So long as astronomers continue to use theories that include ludicrous concepts like space-time, big bang cosmology, dark matter (and dark energy), black holes, neutron stars spinning faster than the blades of a kitchen blender and other illusory observations, no advances in consensus understanding of the Universe will be possible.

“I have never thought that you could obtain the extremely clumpy, heterogeneous universe we have today, strongly affected by plasma processes, from the smooth, homogeneous one of the Big Bang, dominated by gravitation.”