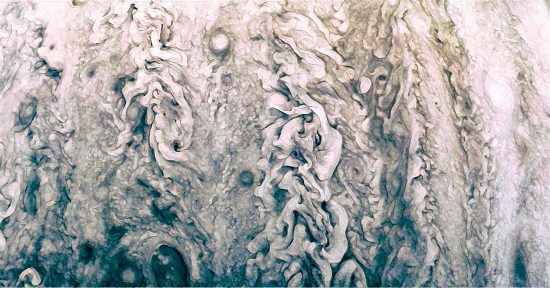 Jupiter’s aurorae are generated by its own electromagnetic fields.

There are many Pictures of the Day in the archives that discuss the planet, Jupiter—especially its electromagnetic interaction with its moons and the rest of the Solar System. Jupiter’s magnetosphere extends outward for nearly 650 million kilometers, reaching beyond Saturn’s orbit. There are also bands of radiation, similar to the Van Allen radiation belts that surround Earth, except that the radiation emitted by Jupiter is thousands of times greater. The most energetic of the trapped electrons radiate at radio frequencies. In 1955 that plasma radiation led to the discovery that Jupiter has a magnetic field. It should be noted, however, that the maverick scientist, Immanuel Velikovsky, predicted Jupiter’s magnetic field in October of 1953.

The Galileo orbiter discovered electric charge flowing around the planet, just as Electric Universe advocates predicted. Also, Jupiter’s moon Io dissipates more than 2 trillion watts of power between them. Until recently, it was thought that electricity traveling through Jupiter’s magnetic field created intense aurorae at its poles.

It is commonly suggested that Earth’s magnetic field is created by “a circulating molten mass of iron and nickel”. The rotating “dynamo” is said to generate electricity that, in turn, generates our planet’s dipolar magnetic field. Jupiter is made up of hydrogen and helium, so how a dynamo can generate electric fields has been a mystery ever since the discovery of its magnetosphere.

An electrical connection between Jupiter and its moons means that they are not electrically neutral. Jupiter exists in an electrodynamic relationship with the Sun, and it was thought that charged particles (the solar wind) power planetary aurorae. However, since Jupiter’s auroral storms are seen when solar activity is low, Io’s influence might provide a key to studying other planetary bodies with magnetic fields.

According to a recent press release, instead of aurorae on Earth caused by charged particles from the solar wind that funnel down through the magnetosphere into the polar regions, Juno revealed that Jovian aurorae are “…powered by the electrons being sucked out of the planet’s polar region, which basically means that Jupiter powers its light-show all on its own…We never expected to see such strong auroral emissions caused by electrons being channelled out of the polar region.”

They were also surprised to find that Jupiter’s, electromagnetic field is twice as strong as their models predicted, measuring 7.766 Gauss, compared to Earth’s 0.66 Gauss at the South Pole.

So, Jupiter’s power and influence are greater than anyone anticipated. With only five of 33 orbits completed, Juno will most likely find more evidence to confirm an Electric Universe.