Home Picture of the Day A Case for Mistaken Identity

A Case for Mistaken Identity 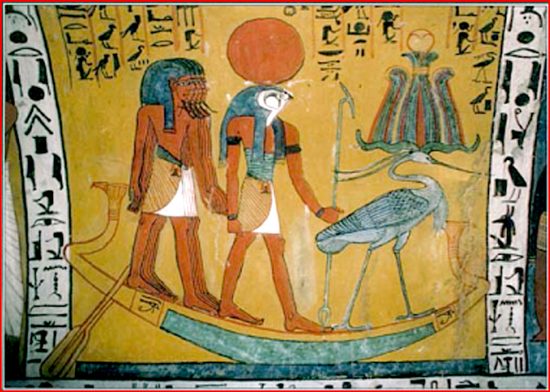 The Egyptian Sun God. Image thought to be circa 1200 BCE.

Ask anyone who has even a modest knowledge of mythology to name the Egyptian sun god and they will probably point to Ra. And why not? Is that not what we have been taught by historians and archeologists?

Dwardu Cardona (1937‑2016) authored many books about comparative mythology. His ability to correlate ancient myths and legends with “signs in the heavens” and the record of Earth’s geological past was a significant force in driving Electric Universe concepts. By uncovering links to the beginning of civilization, perhaps to the beginning of human consciousness, itself, he developed many plausible explanations for past events based on discoveries in astronomy and plasma physics.

Theories that ignore the information uncovered by Cardona and others—that project the heavens as seen today onto the past—tend to dismiss mythological data as nonsense. They trivialize our ancestors as ignorant and barbaric, leaving an impression of condescension, as if no rational people could have formed cultures darkened by so much that appears to be irrational. Ironically, that same dismissive attitude is applied to the data from space probes and telescopes that contradict consensus ideas.

Science, which is supposed to be a journey of discovery, from darkness to light, becomes nothing but apologetics. Cardona’s insights helped to restore awe in the minds of those who view history as a dry collection of irrelevant bones. He illuminated a stark history of catastrophic events that not only scarred our planet, but our very minds.

His death in 2016 left a void that can never be filled. Included here is a Picture of the Day contributed by Dwardu Cardona.

James Frazer spoke plainly when he echoed this dictum: “That Ra was both the physical sun and the sun-god is of course undisputed.”

And yet, if one were to conduct an in-depth study of this Egyptian “physical Sun” and “sun-god” one comes to the realization that, except for the fact that Ra shone brightly in the sky, the characteristics and even motions attributed to this entity do not fit the role of the Sun.

For example, Ra was often lauded as “Lord of the Circles” and as “he who entereth [or liveth] in the circle.” He was described as “the sender forth of light into his circle” and as the “Governor of [his] circle.”

What is the Circle that the hymns allude to? Egyptologists will immediately say that the Circle of which the hymns speak was the Egyptian Duat (or Tuat), a word that means “the Underworld.” That may be so, but Egyptologists since the time of Wallis Budge have conceded that the Duat was away beyond Earth and in the sky. The Duat as a ring surrounding a celestial object comes from the hieroglyphic determinative of the name “Duat” itself, depicted in the texts as a star surrounded by a band or circle. It is thus obvious that whatever Ra signified it was a celestial body that resided within a circle or band or ring.

Does the Sun send forth its rays into a circle? Does it reside in a ring?

Under certain conditions, a ring known as a parhelion (sundog), formed through atmospheric refraction, surrounds the Sun. But not only is this apparition too rare for Ra to have earned the title of “Governor of his circle” and/or “Lord of the Circles” it is also a phenomenon that is restricted to northern regions and hardly, if ever, seen at the latitude of Egypt.

The Egyptians themselves attributed Ra to the god Atum and in fact, this deity is often referred to in Egyptian documents as Atum-Ra. This god bore a specific and strange characteristic – Atum was honored as a sun of night.

Students of Egyptian mythology have long grappled with the exact meaning that lies hidden beneath this strange characteristic of Atum. The best that Wallis Budge could offer by way of an explanation was that Atum was the Sun after it had set. By this he meant to imply that the Egyptians worshipped the Sun even when it was absent from the sky. Sun worship at night, however, makes for an incongruous institution.

As seen in the image at the top of the page, the god Ra is often surmounted with a red or golden disc that is not inappropriate if the Sun is truly being represented. In the liturgies dedicated to him, however, Ra is described as having shed a green, rather than a golden, light: “Thou hast come with thy splendours,” states a hymn to Ra, “and thou hast made heaven and earth bright with thy rays of pure emerald light.”

In another hymn we read: “O Ra…thou dost rise in the horizon of heaven and sheddest upon the world beams of emerald light.” Not only did this celestial object shed a green or emerald light, it was green. “Hail Green One” was how the Egyptians lauded Ra.

Consider further the motion of the celestial object called Ra. In a statement found in one of the Coffin Texts, the deity is addressed with these words: “You shall go up upon the great West side of the sky and go down upon the great East side of the earth.” Is not this contrary to what the present Sun does? Does the Sun today “go up” in the west? Does it “go down” in the east? Nor is this particular Coffin Text the only one in which the motion of Ra is in reverse to that of the present Sun.

More than that, when sailing in his boat, Ra is said to move down at dawn and “upstream” at night, which is again contrary to what we see the Sun doing in our sky at present.

One does not have to be an astronomer to realize that a celestial body described as being green, shedding a green light, shining at night, encircled in a ring or series of rings, “going up” in the west at night and “going down in the east” at dawn cannot have been the Sun. Mythologists, who usually gloss over these characteristics when they do not ignore them altogether, owe us an apology for having presented Ra as the Sun and Sun-god of ancient Egypt.

Other attributes of the Egyptian Ra also contradict identification with our present Sun, but the above should suffice to make the point. The question, of course, is: If not the Sun, what could the celestial object that the ancient Egyptians venerated as Ra have been?