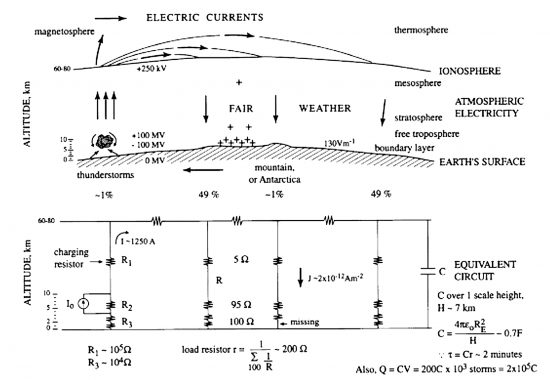 “Everybody talks about the weather, but nobody does anything about it.”
— Charles Dudley Warner

The Magnetospheric Multiscale satellites were launched March 12, 2015 on a mission to study Earth’s electromagnetic fields. The MMS constellation, as well as the Geospace Electrodynamic Connections mission and the Magnetospheric Constellation mission, are part of a widespread, international consortium known as the Global Electric Circuit Project.

MMS, along with TIMED, Cluster, ARTEMIS, and other satellites, is analyzing the Sun’s influence on Earth’s thermosphere, about 100 kilometers in altitude. The solar wind of charged particles first interacts with atmospheric particles in the thermosphere. However, that region is not well understood, especially since TIMED detected a tenfold decline in the thermosphere’s temperature since 2002.

Temperatures in the thermosphere are the result of solar radiation. Atmospheric oxygen becomes ionized when it absorbs ultraviolet light, so it is electrically charged. That energy increases molecular motion, otherwise known as “heat”. Although a mercury thermometer would register temperatures below zero in the thermosphere, it can be over 1500 Celsius during solar maximum.

As written previously, there is an electric potential between the ground and the ionosphere, creating what is called the “fair weather field”, which generates two picoamps per each square meter of ground. Using the formula, Q = 4π R2 εo E = R2 Eo / k, when εo = permittivity of free space (8.85 x 10-12 F/m), it can be shown that Earth is negatively charged with almost 500,000 Coulomb.

Earth is part of a circuit in the Solar System, so the 22 year solar cycle influences Earth’s environment. Although solar energy varies over time, corresponding with sunspot cycles, it amounts to less than one-tenth of one percent. Electricity from space is injected into the thermosphere along massive Birkeland currents. Electric charge flow declines in amperage when the solar wind is at a minimum, which, in turn, decreases the strength of Earth’s magnetosphere. As it declines in strength, it is less able to deflect cosmic rays. Since cosmic rays are charge carriers, collisions between charged and neutral particles drag air molecules along with them, influencing low level cloud cover. More clouds reflect more radiation from the Sun back to space—clouds are white because they are acting like mirrors to all forms of visible light. More reflection means less solar energy, more cloud cover, and so on.

The Sun is returning to a more passive state, otherwise called, “solar minimum”. Changes in the correspondence between electric field strength, cosmic rays, Earth’s magnetosphere, cloud cover, and climate are continuing to be investigated. The Sun’s influence on Earth’s overall climate, as well as short term weather events, can no longer be ignored.