Home Picture of the Day Charge Separation on Jupiter 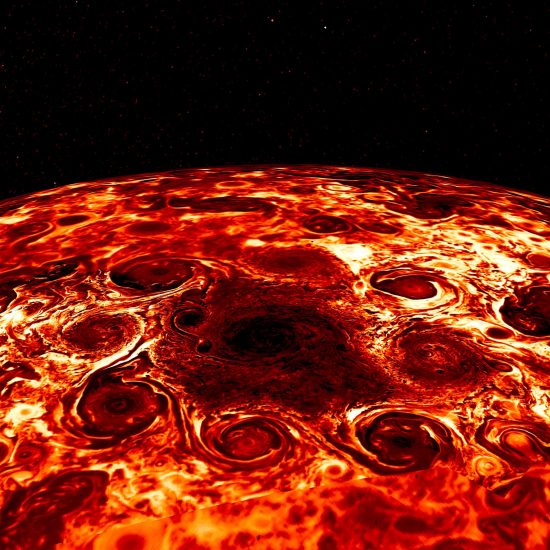 The central cyclone at Jupiter’s north pole and the eight cyclones that encircle it. Colors represent radiant heat: yellow is about -13 Celsius and dark red around -118 Celsius. Credit: NASA/JPL-Caltech/SwRI/ASI/INAF/JIRAM.

What causes the cloud bands and high winds on Jupiter?

NASA launched the Juno mission on August 5, 2011. Its primary science goals include analysis of Jupiter’s massive plasmasphere, along with electromagnetic influences throughout the Jovian system. Jupiter radiates more energy than it receives from the Sun, so astronomers think that some kind of internal dynamo, acting like a generator, “must be” creating the excess. However, there are processes occurring on Jupiter that are now coming to light.

Mission specialists found that it is an electrically active world, far more so than computer simulations predicted. Based on what was surmised about Jupiter, a 5 gauss magnetic field was assumed to exist. When Juno entered orbit and began its scientific measurements, levels as high as 9 gauss were found. Compare those readings to Earth’s .5 gauss field and the enormity of Jupiter’s electromagnetic energy can be deduced. Its field is also irregular, leading some astrophysicists to suggest that there is an anomalous structure in Jupiter’s core.

Recently, Juno discovered jet-streams on the gas giant planet running farther down into its atmosphere than previously thought: 3000 kilometers deep. Why the atmospheric bands are so deep is a mystery, since they have always been associated with superficial weather patterns. Yohai Kaspi, Juno co-investigator from the Weizmann Institute of Science wrote:

“The fact that Jupiter has such a massive region rotating in separate east-west bands is definitely a surprise.”

What causes the depth and mass of those “weather patterns”? Could there be something about Jupiter that does not correspond with conventional theories about planetary formation and interactions? As previously written, Jupiter and its moon, Io, dissipate 2 trillion watts between them. That flow of electric charge causes lightning in Jupiter’s upper atmosphere, along with aurorae at the poles. Since Jupiter is obviously an electrical environment, it is there that some answers can be found.

Rotating charged bodies produce dipolar electromagnetic fields, whether they are gas giants or rocky planets. Why some planets like Earth and Mercury possess magnetic fields, while Venus and Mars do not demands further investigation. However, the basic physics of charged objects in motion generating electromagnetism is not debated.

Readers may have seen the latest report from the SAFIRE project, where distinct, concentric double layers were observed surrounding an electrode discharge within the chamber. What those layers represented was not discussed. Why the plasma isolated itself into discrete bands probably has something to do with why Jupiter’s atmosphere isolates itself into similar structures.

Plasma is not a substance, per se, it is a state of matter. Any material can become a plasma if electrons are stripped from atomic nuclei, causing charge separation to occur. Whenever there are regions of opposite charge—and Juno team members detected a gravitational asymmetry inside Jupiter that most likely contributes to charge separation—double layers will form and an electric field will develop. An electric field, no matter how weak, accelerates charged particles. Depending on the characteristic of any given plasma, it will be affected differently by electricity. This could explain why the atmospheric bands are so deep and so distinct, Jupiter’s electric field accelerates plasmas at different rates.

No doubt more data from Juno will add to the catalog of Electric Universe ideas about Jupiter and other charged celestial objects.