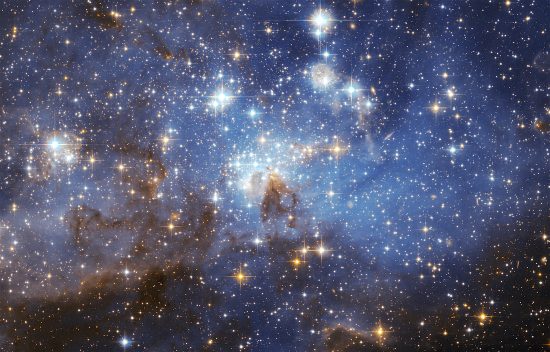 Conventional theories state that stars are born in the cold.

Stars are commonly thought to be bright, burning balls of hydrogen whose gravitational attraction holds planets in their orbits. Theories say that fusion fire in stellar cores sends energy on a million-year journey before the radiation is emitted from their surfaces. Stars are formed in gravity-based conditions. Billions of years before any star was born they percolated in wispy clouds less dense than a puff of smoke. What caused such insubstantial clouds to condense?

Star formation occurs according to two main theories: a nebular cloud might cool down from whatever high temperature it once possessed, so thermal energy falls off, allowing gravity to assert itself on individual particles, causing the cloud to collapse in on itself. Or, the explosion of a supernova might generate shock waves that pass through a proto-stellar cloud, forcing particles to collide and clump together. Gravity then takes up its familiar position, eventually pulling the cloud into a structure dense enough for fusion to take place. As cosmologists suggest, however, material that might become a star must be cold, so the amount of gas and dust that flows into a galaxy must be moderated.

A recent press release states that it is supernovae that control the amount of protostar matter flowing into an active galaxy. The study found “… higher levels of hydrogen outside galaxies than expected, suggesting that violent winds produced by supernovae slow down the flow of gas into galaxies.”

Regardless of shock waves or “radiation pressure”, conventional theories are kinetic and mechanical in their effects. As mentioned, lowering thermal activity is how the first theory suggests stellar formation begins.

In an Electric Universe, gravity, density, compression, and mechanical phenomena give way to the effects of plasma. The stars are not hot, dense balls of hydrogen being crushed into helium and electromagnetic radiation by gravitational pressure. Rather, they are balls of plasma, with all the fusion taking place on their surfaces. If electrical factors are added, temperature and brightness are due to externally applied electric charge and not internally generated fusion energy. Electrically driven stars are an entirely new paradigm.

The Electric Universe definition of “plasma” is not the conventional one of “ionized gas”. Rather, it is an emergent (i.e., higher-level or statistical-level) phenomenon characterized by order in complex electrical forces: filamentation, long-range attraction and short-range repulsion, braiding, characteristic velocities, and formation and decay of plasmoids.

Electric stars do not depend on nebular clouds, they arise out of charge separation. Positive ions and negative electrons might create a charge surplus in one volume of space over another. An electric field will then develop. An electric field initiates a flow of electric charge that generates a magnetic field that interacts with magnetic fields from other currents.