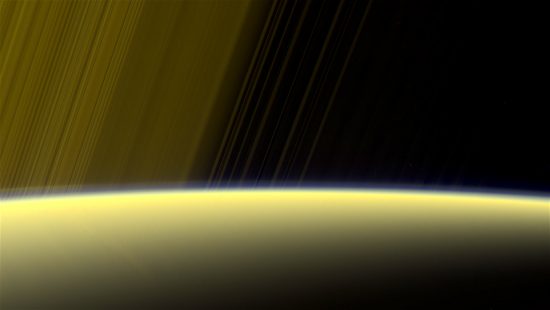 False-color image of Saturn’s sunlit horizon, where a thin haze can be seen along the limb. Credit: NASA/JPL-Caltech/Space Science Institute.

Cassini-Huygens was launched from Cape Canaveral on October 15, 1997. Its primary mission was to explore the Saturnian system, including the atmosphere, rings, magnetosphere and a number of its moons.

As Cassini made its final weekly transits between Saturn and its rings, astrophysicists found that the gas giant’s magnetic field had no discernible tilt; meaning the length of Saturn’s day is still unknown. Since Saturn’s magnetic field is titled less than 0.06 degrees, it does not correspond with how planetary scientists think that magnetic fields are generated. Some tilt is thought to be required in order to create and maintain electric currents through Saturn’s putative liquid metallic hydrogen core. Without a tilt, any electric currents would eventually fade away.

“The tilt seems to be much smaller than we had previously estimated and quite challenging to explain. We have not been able to resolve the length of day at Saturn so far, but we’re still working on it.”

Other observations of Saturn’s moon Enceladus revealed plumes of charged plasma erupting from its south pole. Since the tiny moon orbits inside Saturn’s magnetosphere, it acts like a generator: as its plasma sheath moves through Saturn’s magnetic field, it induces electric currents. This causes an ultraviolet “footprint” of Enceladus in Saturn’s auroral oval, indicative of ion flow from Saturn’s northern hemisphere interfacing with emissions from the moon’s south polar “vents”.

Saturn’s magnetosphere is an electrical environment, although when Cassini got close enough to the giant planet, mission specialists were shocked to find lightning up to a million times more powerful than anything on Earth. In an Electric Universe, planets and moons are not electrically inert because they are embedded in the Sun’s circuit, like electrodes. The “wiring” in that circuit are Birkeland current filaments within the Solar System and the magnetospheres around planets.

Saturn’s magnetic field bends around Enceladus “…due to electric currents generated by the interaction of atmospheric particles and the magnetosphere of Saturn.” Flattening of its magnetosphere on the sunward side is due to an electrical connection between Saturn and the Sun.

Many other surprising and remarkable discoveries were made by Cassini. Among them are the vertical structures that rise above the ring plane; the contoured surface of Titan; the tenuous atmospheres on several of Saturn’s moons; the vast, empty gaps between rings; and a number of previously unknown moons. As data analysis continues, more questions are sure to arise.