Home Picture of the Day Starquakes? 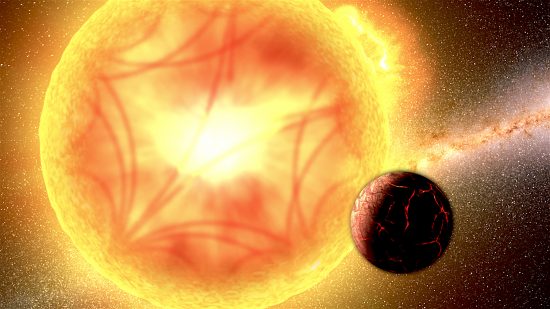 Shockwaves do not drive stellar evolution and behavior.

NASA launched the Kepler mission on March 6, 2009. Its goal was to hunt for planets around nearby stars. Kepler subsequently experienced a failure in its stabilizing mechanism, making it unable to maintain its position accurately enough for planet-hunting, so its systems were repurposed.

Using Kepler’s data catalog about stellar luminosity, astronomers analyzed oscillations in the output of various stars, which, as conventional theories propose, are suggestive of changes in fusion reactions within them. This technique is known as “astroseismology”, and is thought to provide a way for researchers to “see inside” remote stars. The name is derived from “helioseismology”, or the study of shockwave propagation through the Sun. Waves traveling through the Sun’s interior are believed to be similar to seismic impulses that travel through the Earth during an earthquake, so they are called, “helioseismic waves”.

So-called helioseismic events on the Sun are thought to reveal what goes on deep inside. Changes in shockwave frequency and amplitude are supposed to indicate changes in fusion processes in the Sun’s inner layers. Astrophysicists believe that different elements begin thermonuclear fusion at different stages in a star’s life. Comparing those observations with brightness readings from thousands of stars, it is thought that Kepler data can provide clues to how they evolve.

A recent press release states that in order to create computer simulations of stellar behavior, “…astrophysicists vary stellar evolution models until one of them fits to the observed frequency spectrum. However, the pulsations of the theoretical models often differ from those of the stars, most likely due to some stellar physics still being unknown.”

Since the Sun is a locus of positive charge with respect to interstellar plasma, electric discharges penetrate its photosphere, allowing electric charge to flow into its interior. Electromagnetic flux tubes reveal that it is cooler inside the Sun, so the idea of kinetic heat transfer from a hot core cannot be supported by observations.

It was written elsewhere that Jacobsen and Carlqvist first suggested that double layers cause the release of stored electromagnetic energy in the Sun. That idea was further refined by Alfvén and Carlqvist in 1967.

Modern astronomers are transferring ideas about Earth onto objects in space. Building models of stars that depend on “acoustic waves” that travel through them as if they were a solid will only serve to darken the issue. Investigators are stacking a load of bricks on a pool of mud. A theory about stars based on sound waves and earthquakes seems misguided.

“Countless billions of dollars have been wasted based on the thermonuclear model of stars. For example, trying to generate electricity from thermonuclear fusion, ‘just like the Sun.’ The thought that solar scientists have it completely backwards has not troubled anyone’s imagination. The little fusion power that has been generated on Earth has required phenomenal electric power input, ‘just like the Sun!’ The Sun and all stars consume electrical energy to produce their heat and light and cause some thermonuclear fusion in their atmospheres.”