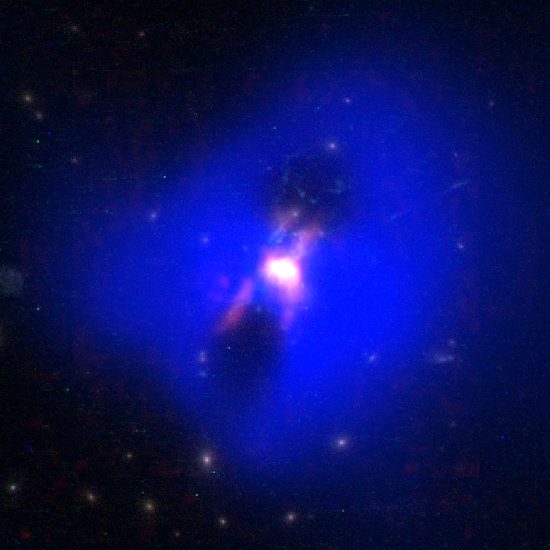 Black holes are said to heat galactic nuclei while at the same time cooling down their radiant emissions.

Over the last century, laboratory investigations established the fact that plasma is electrical in nature. The flow of electricity through plasmas form Birkeland filaments, double layers, and electric current instabilities. Each formation is capable of accelerating charged particles and emitting X-rays. In fact, they can accomplish that feat without million degree temperatures, just a strong electric field.

Stars are formed in electrical nurseries, rather than in the cold dust of interstellar space. Conventional theories require cold dust, since any increase in temperature causes dust clouds to dissipate, instead of condense. Astronomers recently announced that black holes create the dust needed for new stars to form. Observations by the Chandra X-ray Telescope revealed “jets” from the core of a distant galaxy creating “radio bubbles” in the plasma around it. According to astronomer Brian McNamara:

“This supermassive black hole is regulating the growth of the galaxy by blowing bubbles and heating the gases around it. Remarkably, it also is cooling enough gas to feed itself.”

Those radio lobes are familiar to Electric Universe proponents, since similar formations were discovered around the Milky Way by the Fermi Gamma Ray Telescope. Twin lobes of gamma rays extend outward beyond the Milky Way’s central bulge in an hourglass shape; each structure measures approximately 65,000 light-years in diameter.

Rather than “bubbles” of radiation, the lobes are an unmistakable signature of Birkeland currents squeezing plasma and charged dust into z-pinch zones. The intense electromagnetic fields associated with Birkeland current filaments cause electrons to accelerate with velocities close to light speed. Those excited electrons emit synchrotron radiation, the principle source for radio emissions (and gamma rays) in space.

Almost every body in the Universe displays some kind of filamentation. For example, the jets from energetic galaxies resolve into braided filaments, while the spiral arms of some galaxies exhibit twisted strands of material extending from their cores. As the Chandra press release also states, “long filaments” extend up to 82,000 light-years from either side of the active galaxy’s nucleus, with “enough material to make about 10 billion suns”.

All those filaments are Birkeland currents, but they only represent the visible portion of an entire circuit. Every element in a galactic circuit radiates energy, and are powered by coupling to larger circuits. How big are those larger circuits is unknown, but since galaxies occur in strings, they must traverse millions of light-years.

Plasma cosmologists expect temperature discrepancies in galaxies, because laboratory plasma experiments indicate that they should exist. Hannes Alfvén, in the introduction to his book, “Cosmic Plasma”, points out examples of plasma behavior in his lab that astronomers are not aware of:

“The plasma exhibited striations, double layers, and an assortment of oscillations and instabilities. The electron temperature was often found to be one or two orders of magnitude larger than the gas temperature, with the ion temperature intermediate.”

Rather than fictional black holes with powerful energies that both heat up and cool down interstellar gas and dust, it is electricity in space, exhibiting its characteristic behavior, that provides the impetus for star formation.