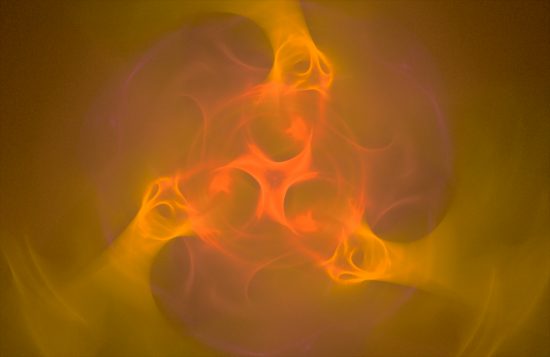 Recently, the Picture of the Day addressed cosmic filaments connecting vast galactic structures. The formations could mean that the visible Universe is a braided filament that reaches from the Virgo supercluster to the Fornax supercluster across billions of light years.

Those filaments are the unmistakable signature of Birkeland currents. Whenever electricity travels through a cloud of ionized matter, called plasma, a magnetic field is generated that “wraps around” the charge flow. The field constricts the current, increasing the force of the electromagnetic field, which, in turn, increases the strength of the electric field. That condition continues, until the strand of electromagnetically confined plasma reaches a state where its inward compression is balanced by its electromagnetic repulsion.

According to a recent press release, a “…snake-like structure lurking near our galaxy’s supermassive black hole is the latest discovery to tantalize astronomers.”

There is no need to go into the speculations offered by the research team. It is sufficient to say that the supernatural physics of supermassive black holes is invoked in order to explain what is seen. Black holes are a flimsy foundation upon which to build cosmological theories. The consensus community freely admits that they have little understanding of what a black hole is (or is not), so the theories that use principles of collapsed matter and super gravity are castles in the air.

There is no evidence that matter can collapse to “near infinite density” under gravity’s influence. Black holes are phantoms that can never be observed, since their so-called “event horizons” are impenetrable, allowing no direct observations. No light can escape, so they are invisible at any wavelength. They are pure theory, and have no basis for existence in the natural world.

X-ray radiation, as well as radio waves from a plasmoid in the Milky Way’s heart, is the same as that from stars undergoing strong electrical stresses. A plasmoid is a charged particle accelerator, so electrons spiral in the electromagnetic fields and give off X-rays. The diffuse currents then flow toward the galaxy’s equatorial plane and spiral back toward the core.

“Black holes are a ‘school-kid howler’ perpetrated by top scientists. It involves taking Newton’s gravitational equation to an absurd limit by dividing by zero to achieve an almost infinitely powerful gravitational source. This is done by impossibly squeezing the matter of millions of stars into effectively a point source…The natural formation of highly focused jets from some stars and active galactic nuclei is now clear. And the rapid motion of stars close to our own galactic center may be explained by the assemblage of matter there in the form of a dusty plasmoid constrained by powerful magnetic fields.”