Home Picture of the Day Cousins 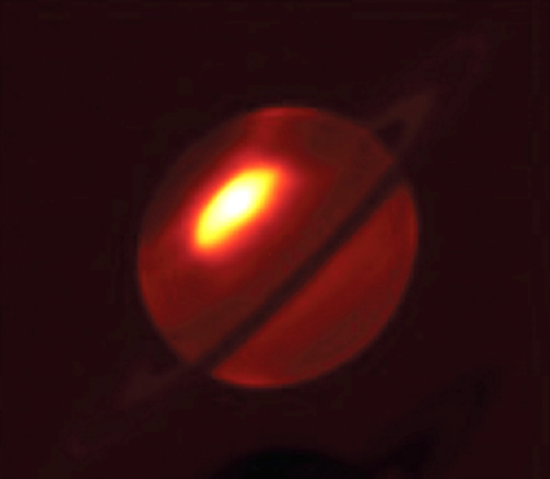 Earth and Saturn are similar in some ways.

Earth exhibits a periodic oscillation in its atmosphere called, the Quasi-Biennial Oscillation (QBO). The QBO involves winds at high altitude above the equator. Stratospheric winds circle the planet, changing direction about every 14 months. This means that the QBO is the most regular atmospheric variation, aside from the change of seasons. Intense tropical weather systems push density waves up into the stratosphere. Those waves gradually descend over time, until they reach the boundary layer between the upper atmospheric limits and the troposphere, where they cause a reversal in the high altitude winds.

According to a recent press release, Saturn’s wind direction is also subject to a similar phenomenon. Saturn’s wind oscillation is called the Quasi-Periodic Oscillation (QPO) and acts in similar fashion to that on Earth. It is remarkable that the atmospheres of Earth and Saturn show similar activity in their equatorial regions, involving temperature and wind variations repeating over multiple years.

However, on Saturn (as well as on Earth), the regular oscillations can be disrupted by events that take place far from the equator.

Sandrine Guerlet from Laboratoire de Météorologie Dynamique (LMD), France wrote: “We looked at data of Saturn’s ‘heartbeat’, which repeats roughly every 15 Earth years, and found a huge disturbance—a palpitation, to continue the metaphor—spanning 2011 to 2013, where the whole equatorial region cooled dramatically. When we checked the timing, we realised this happened directly after the eruption of a giant storm that wrapped around Saturn’s entire northern hemisphere. This suggests a link between the two events…”

Their research confirms that Saturn’s QPO is influenced by distant events, often more than 10,000 kilometers away, in the planet’s atmosphere.

The Cassini mission ended in September 2017, but its data store will be analyzed for years to come. Among the observations were changes in Saturn’s wind speeds, direction and altitude:

The storms on Saturn (or on Earth) are not due to fluid dynamic phenomena, alone, but are caused by electrical phenomena equivalent to sunspots. The Sun changes its behavior over the course of a 22 year cycle, so its electrical output varies. The same holds true for Saturn. Saturn possesses a Langmuir charge sheath (plasmasphere) that isolates it from the Sun’s own charge sheath that, in turn, is isolating the Sun from the charged interstellar medium.

Saturn periodically breaks out with a great white spot three times larger than Earth. Traditional models of Saturn cannot explain such an outburst, but lightning discharges deep in its atmosphere could cause vertical jets similar to the sprites in Earth’s upper atmosphere.

If Saturn’s Great White Spots, Great Northern Latitude Storms, and other examples, such as the ring spokes, are driven by the same galactic Birkeland currents that drive the Sun, they should get stronger and closer to the equator as the sunspot cycle oscillates. That is just what happened over the past three decades.