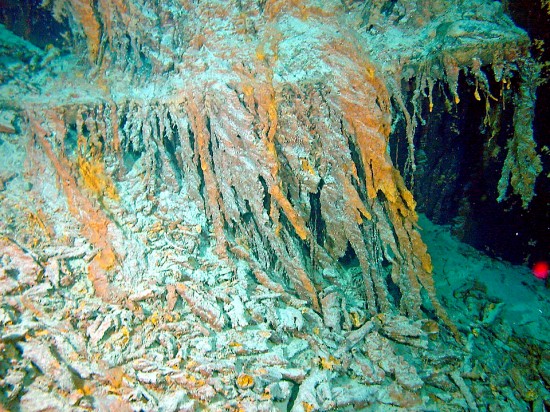 A previous Picture of the Day described the way that some single-celled organisms make use of charge exchange in order to drive their flagella. Rather than the conversion of ATP, they move protons along special cellular structures, converting that flow of electric charge into torque.

When Bob Ballard found the Titanic in 1985, he and his crew were shocked by how much rust was present on the ill-fated ship. Long “rusticles” were seen hanging from the hull like great mossy streamers. The rusticles were subsequently found to contain at least 27 bacterial species that were, from a strictly chemical viewpoint, rapidly disintegrating the low carbon steel out of which Titanic was built. Some of the bacterial colonies can use the corrosion process to fuel their biochemistry.

Corrosion occurs in moist environments when a metal (in this case, iron) is stressed, or when it is shielded from the air, such as when two pieces of metal are loosely joined together. Metallic ions dissolve in the moisture, causing electron movement from anodic to cathodic locations. This happens because iron is conductive, allowing electrons to flow through it. The electrons are then taken up by a “depolarizer”, such as oxygen, which is the most common. The resulting hydroxide ions, along with ferrous oxide (Fe2+), form hydrous iron oxides, otherwise known as rust.

It is not generally understood how bacteria can use metals for transpiration. However, in the February 26, 2004 issue of Nature, it was reported that scientists from the Max Planck Institute identified some processes by which bacteria can exist using iron for energy: “There are microbes out there that put electrons onto Fe3 and generate Fe2, and those are often referred to as breathing iron. In this case, it’s more like eating iron.” These bacterial types are called chemotrophs.

In the January 29, 2013 issue of mBio, published by the American Society for Microbiology, it was announced that scientists have found a way to cultivate iron-eating bacteria electrochemically. Essentially, they provide them with a supply of free electrons that the bacteria use for respiration.

“It’s a new way to cultivate a microorganism that’s been very difficult to study. But the fact that these organisms can synthesize everything they need using only electricity makes us very interested in their abilities,” said Daniel Bond of the BioTechnology Institute at the University of Minnesota.

They provided the bacteria with electrons at the same rate that they would receive from Fe2+ in order to “fool the bacteria into thinking they’re at the world’s best buffet of Fe(II) atoms.” Surprisingly, the bacterial colonies grew on the electrode. Since there was no iron present in the medium, it proved that they were living off a flow of electric charge.

Other research teams have identified bacteria that not only consume electrons, they excrete them when the voltages are lower. In the future, a combination of those various microbes could contribute to something like an organic battery that can be charged and then discharged: the power output would vary by the size of the colonies.