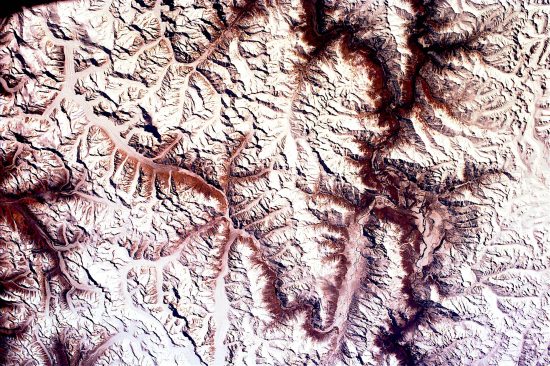 The Karakoram Mountains from the International Space Station. Credit: NASA. Click to enlarge.

Vertical cliffs around the world are not easy to explain.

The Karakoram mountains are one of the largest mountain ranges on Earth, extending from Pakistan to India and into China. Among its largest peaks is K2, an 8600 meter massif that once was considered impossible to climb. Great Trango Tower is an example of contradictory morphology when it comes to the consensus view of erosion. It is a granite monolith 6286 meters high. A distinguishing feature of the tower is the world’s highest almost vertical drop at 1340 meters. Only Mount Thor on Baffin Island is truly vertical, with a 1250 meter drop straight down. These giant pylons show little debris at their feet, begging the question of uniformitarian erosion.

Great Trango is thought to be a “pluton”, an intrusion of molten rock that rose from deep in Earth’s crust, melting its way through sedimentary rock strata before solidifying just beneath the surface. The sediment layers, being softer rock, subsequently eroded away, leaving the hard granite exposed. Conventional geologists attribute Great Trango’s youthful look to the overburden that “protected” it from weathering over millions of years.

At first blush, the idea seems reasonable. After all, no rain or windblown sand could scour buried plutons, in general. However, there are logical inconsistencies. The most pressing dilemma is that the sedimentary rocks are nowhere to be seen. There is little silt in the nearby lakes. Since they have no outlets, and are filled by snowmelt each year, what happened to the megatons of sediment that should have clogged them to capacity over the eons?

If Great Trango and other peaks were exposed over millions of years by weathering, why are their summits not more heavily eroded than their basements? Presumably, subzero temperatures caused “freeze and thaw” erosion, along with hurricane-force winds bombarding them with sandy grit for thousands of centuries. So, why do they appear as if they emerged from their stoney encasements a short time ago?

The aciculate mountains of Patagonia, reveal similar oddities: lakes with no outlets and no silt; vertical cliffs with multiple terraces up their sides; layering in the hardest igneous rocks; flat-topped mesas with hundreds of potholes; narrow valleys containing no sedimentary debris; blind canyons; and mountain ranges in concentric rings that contradict conventional uniformitarian thinking.

Electric Universe theory postulates a catastrophic interplay of celestial forces that are not seen today. As mentioned in previous Picture of the Day articles, electric arcs dissected continental geography, creating what traditional theories say are ages-old structures in an instant of time.

Tornadoes of electric fire writhed across the face of the Earth, excavating canyons, ocean basins, and river valleys. Inland seas evaporated, leaving scorched and naked stone behind. Intense electrodynamic forces compressed material out of the surrounding region, creating uplifts that are mistaken for intrusions when they are actually extrusions.

Since electricity is a pulling force and does not “impact” the surface, anomalous formations like Great Trango Tower are the result of gigantic secondary discharges that rose up to meet oppositely charged leader strokes descending from above. As they projected upward, the secondary bolts melted surrounding rock strata, pulling charged and neutral matter into the discharge channel and launching it upward, perhaps all the way to outer space. Rocks and other materials were also vaporized, condensing into ultra fine dust that ionic winds blew away.