Home Picture of the Day Twelve Years In Orbit 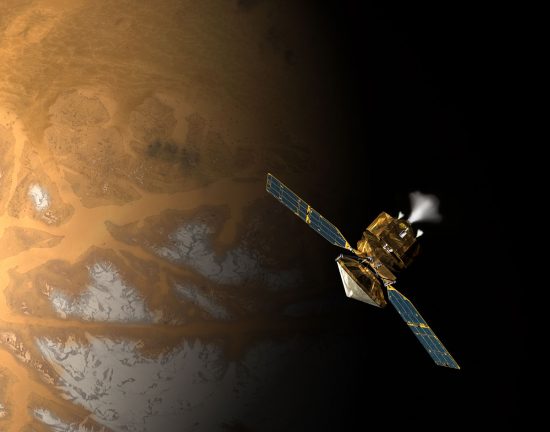 NASA launched the Mars Reconnaissance Orbiter (MRO) August 12, 2005 on a mission to map the surface of the Red Planet. Along with its primary topographic goal, planetary scientists continue to search for water in the barren wastelands of Mars. MRO is probably the most successful mission ever sent to Mars—so much so that it will be funded indefinitely.

The High Resolution Imaging Science Experiment camera (HiRise), a 0.5 meter telescope able to resolve objects as small as 30 centimeters from 300 kilometers above the surface, continues to provide support for an Electric Universe. Many examples of past, intense electrical activity on Mars are revealed in image data obtained by HiRise.

Mars is about half the size of Earth, with an equatorial diameter of 6793 kilometers. Its average temperature is – 63 Celsius, compared to Earth at 13 Celsius. The atmospheric density on Mars is about 0.6% that of Earth at sea level. It is so diffuse that the 300 kilometer winds that occasionally blow across its surface would feel like a gentle breeze of around two kilometers per hour—hardly enough to move fine dust, let alone sand grains.

It is not known how Mars “lost” most of its atmosphere. Conventional theories speculate that four billion years ago an asteroid impact exploded with such force that it blew the atmosphere away. Or, a barrage of charged particles from a solar “super flare” ate away the atmosphere, leaving Mars as the freeze-dried mausoleum that it is today.

Martian areography tells a story of incredibly violent events. Images from HiRise indicate that it once experienced powerful plasma discharges on a massive scale. As terrain mapping instruments reveal, the northern latitudes of Mars are six kilometers below the mean elevation of the planet.

On Mars, deep channels, ripples and other structures are thought to be the remains of water flowing on the surface, eroding it in the same way as water is believed to erode our planet. Consensus theories suggest that oceans of water covered Mars millions of years ago, so chemicals that form on Earth in the presence of water are presumed to have formed on Mars in the same fashion.

Burned and blasted craters, piles of scorched dust covering almost an entire hemisphere, and trenches that wend across its scarred face lead to the conclusion that lightning bolts millions of times more energetic than we know today devastated Mars. The existence of these formations constitutes a confirmation of the Electric Universe theory.

It has been suggested many times that electric arcs could have sculpted what we see on Mars. Valles Marineris, Olympus Mons, the vast 900 kilometer crater in Argyre Planitia, and terraced mounds in Candor Chasma demonstrate strong support for an electric discharge theory.

NASA scientists often refer to what they find on Mars as “mysterious” or “puzzling”, with long years of research and contemplation ahead of them. From an Electric Universe perspective, the reason for the confusion is the problem of reverse application. Earth should not be used to explain the Solar System.