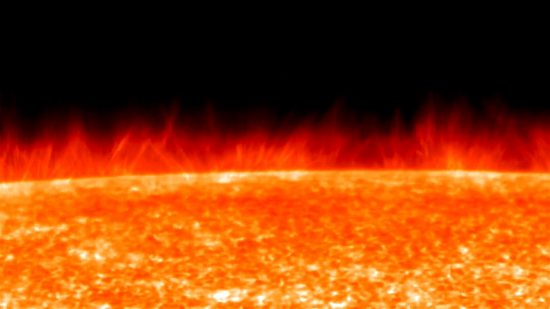 The Sun is a charged body seeking equilibrium with its surroundings.

The electric charge flow into and out of the Sun can sometimes increase to the point where it releases plasma discharges called solar flares. Conventional scientists think that solar flares occur when magnetic loops “reconnect” with each other, causing a short circuit. The so-called “magnetic energy” is said to accelerate gases into space. Although magnetic reconnection is a poorly constructed theory, it is the only explanation offered by heliophysicists.

Another solar phenomenon not well understood from the fusion stand point is sunspots. Electromagnetism is known to be involved with sunspot activity, since loops of plasma can often be seen connecting two or more of them. Why or how that magnetism is at work on the Sun remains unclear in consensus opinions. Fibrils can be detected with high resolution photographic equipment in the darkened cores of sunspots.

This is where understanding the difference between hot gas and plasma could provide some illumination: sunspots are not the result of gas convection modified by magnetism, sunspots are electrical structures. Images of sunspots reveal filamentary structures. Those filaments indicate that they are charge vortices, because electric discharges in plasma form rope-like, hollow tendrils. Being “funnels” of plasma, their centers are darker. Convection cells would appear darker at their edges. Standard theory does not accept that darker regions revealed by sunspots means that the Sun is cooler in its interior.

In the image at the top of the page, another phenomenon called “spicules” can be seen. The smallest features are 130 kilometers in size. Each spicule is about 480 kilometers in diameter, with a length of 3200 kilometers. The largest spicules can be 8000 kilometers long.

Recently, solar observers using the Fermi Gamma-ray Space Telescope reported that gamma-rays were detected, although the solar flare that created them was on the far side of the Sun, facing away from the telescope. They thought that the Sun should have blocked the light from its far side, but Fermi detected energies exceeding 3 billion electron volts. What is the nature of this puzzle?

“Fermi is seeing gamma rays from the side of the sun we’re facing, but the emission is produced by streams of particles blasted out of solar flares on the far side of the sun. These particles must travel some 300,000 miles within about five minutes of the eruption to produce this light.”

Instead of seeking explanations based on electrical activity, the heliophysicists resort to “impact”, with “collisions” between protons. However, a critical factor in the observation is that they saw charged particles and not neutral atoms.

The Electric Universe pioneer, Ralph Juergens wrote a paper in 1979 called, “The Photosphere: Is it the Top or Bottom of the Phenomenon We Call the Sun?” Juergens proposed that solar spicules are actually the way that the Sun re-supplies its electrical potential and maintains its photospheric double layer.

“In order to maintain the double layer above the photosphere that causes almost all the observed properties of the Sun, a certain ratio of the number of outgoing positive ions to the number of incoming electrons must exist. Quoting from Ralph Juergens: ‘In a much cited classical review paper of 1929, Irving Langmuir demonstrated that a double sheath (double layer) is stable only when the current densities of the positive-ion and electron flows across it are properly related. The ratio of the electron current into the spicule to the positive-ion current out of the spicule must equal the square root of the ion mass divided by the electron mass, which is to say: electron current/ion current)^2 = ion mass/electron mass = 1836. Thus electron current/ion current = 43.’

“So there needs to be a lot more (43 times as many) electrons coming down through the double layer as there are positive ions moving outward. Where do they come from?  “In that same year (1979) Earl Milton composed a paper titled, “The Not So Stable Sun” in which he wrote:

“‘In order to maintain a stable sheath between the photosphere and the corona a great many electrons must flow downward through the sheath for each ion which passes upward. The solar gas shows an increasing percentage of ionized-to-neutral atoms with altitude. Some of the rising neutral atoms become ionized by collision. Some fall back to the solar surface. The rising ions ascend into the corona where they become the solar wind. The descending gas flows back to the Sun between the granules – in these channels the electrical field is such that ions straying out from the sides of the photospheric tufts [spicules] flow sunward, and hence the electrons flow outward. The presence of these channels is critical to the maintenance of the solar discharge…. Here we have an explanation for the spicules, huge fountains that spit electrons high into the corona.’

“In my (Don’s) opinion this also explains what causes sunspots. Wherever the #p/#e ratio is not maintained, the double layer collapses – the photospheric tufts disappear. So we get a spot in that location.”

When electric charge flowing into the Sun’s plasma sheath increases beyond a critical threshold it can trigger a sudden release of that energy, causing solar flares. When the charge accumulation grows too strong, the plasma double layer is destroyed. That event interrupts the charge flow and the stored electromagnetic energy is blasted into space as a solar flare. Solar flares can therefore be thought of as lightning bolts in and on the Sun, sometimes throwing vast quantities of matter into space at near relativistic speeds. That is the nature of the phenomena witnessed by Fermi.