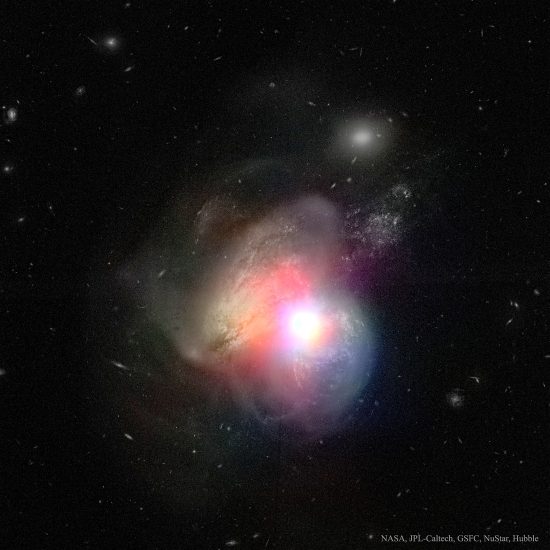 Black holes are said to collide.

NASA launched the Nuclear Spectroscopic Telescope Array (NuSTAR) aboard a Pegasus rocket on June 13, 2012. A new X-ray image highlights a “monster of a galactic mashup”: two colliding galaxies, known as Arp 299, with “supermassive black holes” inside them.

According to co-author Ann Hornschemeier:

“When the cores of the galaxies get closer, however, tidal forces slosh the gas and stars around vigorously, and, at that point, both black holes may turn on.”

Information from NuSTAR is thought to show that only one black hole is “feeding on gas” causing “energetic processes” that raise nucleonic temperatures to hundreds of millions of degrees. That process is what is supposed to form a plasma corona that lights up in X-ray radiation.

As written many times in previous Pictures of the Day, black holes are an inferred phenomenon; they cannot be detected by any instrument. Astrophysicists assume that matter can be accelerated and compressed by a black hole’s gravity. That forms the foundation for most conventional ideas about how galaxies behave, since it is commonly assumed that 98% of them contain supermassive black holes. Anomalous data is always forced into that theoretical framework or is consigned to the “mysterious” realm; scientific papers are filled with statements about “puzzlement” and “unexpected results”.

For example, X-ray flares from galaxies are thought to be caused by stars torn apart by black hole tidal forces. Most of the gas and dust escapes, but some is captured, forming a rotating disk. Closer to the black hole, heat generated by molecular collisions tears atoms apart and the disk glows in extreme ultraviolet and X-rays. This is what is referred to as a black hole’s “corona”.

No direct evidence exists for matter compressed to nearly infinite density. Instead, as written many times in the past, z-pinches in plasma filaments form plasmoids that energize stars and galaxies. When charge density is too high, double layers form, catastrophically releasing their excess energy in bursts of X-rays or flares of ultraviolet light.

That electric charge flow in plasma generates magnetic fields that constrict the current channel. Pinched electric filaments remain coherent over long distances, spiraling around each other, and forming helical structures that can transmit power through space. Those filaments are the jets seen in galaxies and stars. No gigantic masses compressed into tiny volumes are necessary: laboratory simulations of flares and jets can be generated with the proper experimental equipment. Comparing the behavior of X-ray jets from Arp 299 with those laboratory results, it could be that lightning flashes are taking place in the center of what will become a galactic pair as the two separate from one another due to increased electrical stress.