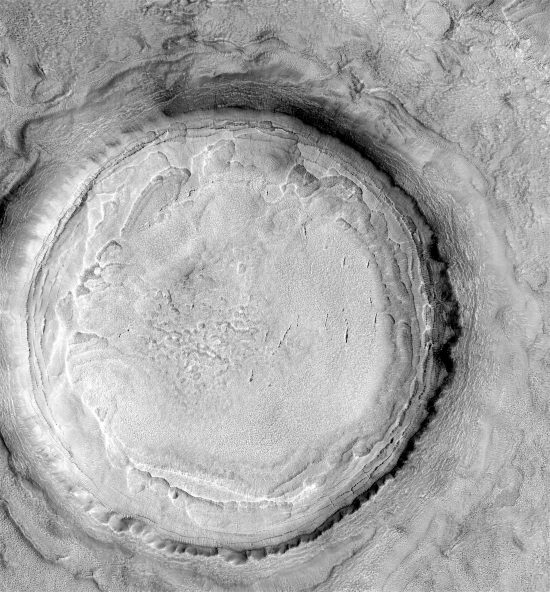 The search for water on Mars continues.

According to a recent press release, Mars may not possess the large quantities of water-ice that previous observations suggested. Data provided by the Mars Express orbiter points to, “ice-free, porous, windblown sand” and not subsurface ice. Thomas R. Watters, a senior scientist from the Smithsonian, wrote:

“Our results suggest that caution should be exercised in attributing non-polar deposits on Mars with low dielectric constants to the presence of water ice.”

Water sustains life on Earth, so it is assumed that water must be necessary to establish and nourish life elsewhere. The Mars Express spacecraft, for example, along with rovers on the surface, is attempting to confirm that it exists out in the open on Mars, or that it once flowed as a liquid. Planetary scientists hope they will find regions that are shielded from direct sunlight with water-ice just below the regolith.

Mars Express was launched on June 2, 2003 with a mission schedule designed to last for one Martian year. However, it was re-funded several times over the years, and is now considered to be a continuously operational mission. Hundreds of images from its onboard telescopic camera reveal rock layering, craters, canyons, and cliffs dominated by faulting and pitting. Some features suggest that the observed strata is sedimentary—laid down by water and then eroded by wind.

Research groups studying Mars assume that it is covered with permafrost, because the temperature averages -50 Celsius. It is colder still in the northern and southern latitudes, so cold that carbon dioxide freezes into solid dry ice during the winter months. Therefore, water is thought to accumulate into icy underground reservoirs, preventing it from subliming in the low-density atmosphere.

A previous Picture of the Day noted that subsurface ice deposits larger than California and Texas, combined, are thought to exist in higher latitudes near Arcadia Planitia. An important consideration is that ice is not directly observed, it is the general topography, together with terraces in various craters, that led to the conclusion. Conventional analysts believe that meteors create a certain kind of Martian crater, so when unusually uneven or chaotic craters are found, they think the substrate is the cause. Impacts melted the putative ice deposits that were there, so the churned-up surface winds up being pitted and porous.

Electric Universe theory proposes that Mars was once the scene of powerful electric arcs that cut the planet’s surface. Plasma discharges formed sinuous rilles, flat-floored craters, intersecting gullies with no debris inside them, giant mesas with Lichtenberg “whiskers”, and steep-sided ravines wending through landscapes dotted with circular uplifts.

If Mars was devastated by planetary lightning bolts and not by glaciers or floods, should similar observations on Earth be reconsidered? Perhaps Earth topography was also created catastrophically and not over slow eons of time. Electricity is a powerful formative agent, far more so than soft ice.