Home Picture of the Day White and Bright 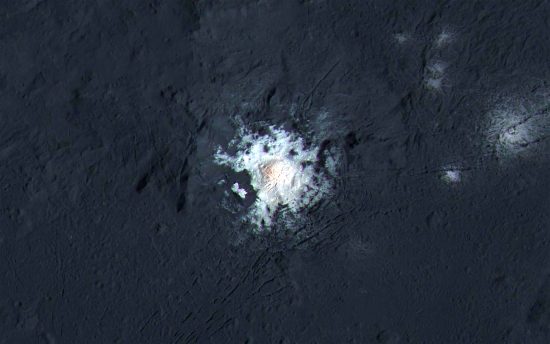 The center of Occator crater. Credit: NASA/JPL-Caltech/UCLA/MPS/DLR/IDA/PSI/LPI. Click to enlarge.

NASA launched the Dawn spacecraft on September 27, 2007. After its observations of the asteroid, Vesta ended on September 5, 2012 Dawn headed toward Ceres. Dawn encountered the largest known asteroid in the Solar System on March 6, 2015. The mission officially ended in June of 2016, but the spacecraft will continue orbiting Ceres for a long time—a minimum of 50 years.

Ceres is roughly spherical, with a mean diameter of 950 kilometers, and is considered to be a dwarf planet like Pluto and several recently discovered Trans-Neptunian Objects. Its size and density are similar to Saturn’s moons Tethys (1072 kilometers) and Dione (1120 kilometers). With a density of 2.08 g/cm³, it could also be covered with a thick layer of ice. Since it compares with Pluto’s density measurement of 1.88 g/cm³, according to former research team members, there might be silicate rock beneath the ice. No one is sure, at this point.

The vast majority (if not all) craters appear to be aligned with its center of gravity. That alignment is absurd, however, since it means that every object impacted at 90 degrees to its surface. As pointed out in previous Pictures of the Day, the craters have flat floors, scalloped edges, vertical sidewalls, craters on the rims of other craters, hexagonal formations, and crater chains. The crater alignment problem is solved if large craters on Ceres are electrical in nature.

Electrically excavated craters can be recognized by their steep sides, sharp rims, flat floors, and a lack of blast debris around them. Since electric arcs are constrained by electromagnetic fields, they are always aligned with the direction of the current and forced to maintain right angles to the surface.

Geshtin crater, for example, is 77 kilometers wide, with 60 kilometer-wide Datan crater on its rim. Datan was supposedly then hit on its rim. Since more then half of the craters on Ceres have other craters on their rims, chance impacts from meteors is an intellectual stretch, at best.

Occator is another large crater, about 90 kilometers wide and four kilometers deep. It was one of Dawn’s more intriguing discoveries, because of the large, bright mound and bright patches inside it. The spots were initially thought to be water-ice, although Picture of the Day articles from that time insisted that there could be no open ice in a vacuum. The most obvious source for those comparatively bright areas was some kind of highly reflective dust. Ceres was found to be composed of carbonates and silicates, so that composition was a clue to the nature of the material: carbonates and silicates are white.

A recent press release speculates that the patches are the result of melting from impacts. The melted subsurface material then “welled up”, depositing the various minerals, now positively identified as carbonates and silicates, in and around the craters. The conclusion is sound, the material is from beneath the surface, but the transfer method is questionable. Ceres was the scene of violent electrical events in the recent past. The forensic evidence, detailed above, is preserved by the deep cold and vacuum on Ceres.

As previously written, when electricity passes over a solid body, the current pulls charged material from the contact surface. Neutral dust and stones are pulled along with ionized particles. Craters formed by electric arcs are circular because electromagnetic forces cause the arc discharge to maintain right angles. Since two or more filaments rotate around an arc axis, its secondary discharge can excavate steep side walls. If the surface is negatively charged, an arc will travel, and might jump from high point to high point. Smaller craters on the rims of larger ones reveal this phenomenon. A series of craters in a line, otherwise called a “crater chain”, is another sign of arcing to a negatively charged substrate.

Ceres is a barren wasteland: craters out of proportion to its size, deep trenches, weird mountains, and bright material underneath a scorched and blasted surface. It shares its morphology with other Solar System objects: Vesta, for instance, is a smaller fraternal twin, with comparable formations.

Ceres exhibits what can best be described as a violent past. Whether that past was recent in the history of the Solar System, or more remote in time, is not important. From an Electric Universe perspective, what is important is the reason behind that devastation.