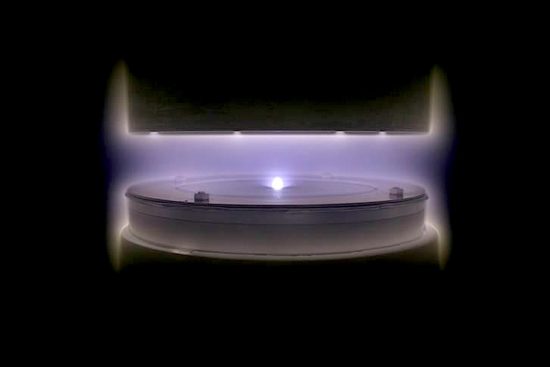 Electrical discharges in plasma are a better model for solar activity than the models derived from gravity and turbulence.

About 100 years ago, Kristian Birkeland led the Norwegian Aurora Polaris Expedition to a mountain inside the arctic circle, where he and his colleagues discovered that Earth’s aurorae form when charged particles from the Sun travel down the polar magnetic cusp, parallel to the polychromatic displays. Since electric currents must complete a circuit, he wrote that those particles probably flow down from space at one end of the auroral arc and back out to space at the other end. Birkeland proved the idea in his laboratory when he created an auroral light simulation using a magnetic sphere inside a vacuum chamber.

Experiments with the positively charged sphere also revealed that a plasma torus forms above the sphere’s circumference. Charged particles couple the sphere’s middle and lower latitudes, similar to solar anode tufting, described in a recent Picture of the Day.

The Sun is the most powerful electrical source in the Solar System, so its influence extends outward as far as the heliospheric boundary, past the orbits of the most remote objects, like Sedna or Varuna. A stream of charged particles radiated by the Sun, called the solar wind, accelerates through the Solar System, yet is a poorly understood phenomenon. For decades, the source of its extreme heat has baffled space scientists.

Heliophysicists believe that turbulence causes variability in the solar wind, as well as contributing to its anomalously high temperature. So, its high temperature and acceleration are said to be caused by fluid dynamic phenomena, such as the Rayleigh-Taylor instability. On the other hand, it is the movement of electric charges in plasma that forms electromagnetic fields that constrict the electric charge flow. As previous Picture of the Day articles point out, the constricted channel is known as a “Bennett pinch,” or “z-pinch.” The pinched electric filaments remain coherent over long distances, forming helical structures that can transmit power through space. That phenomenon is what scientists refer to as flux ropes. They also create electromagnetic structures called “plasmoids”.

Infrared and X-ray telescopes confirm the existence of a plasma-focus plasmoid at the heart of the Milky Way, the real power behind our galactic circuit. Viewing the galactic core was not possible until the invention of telescopes that can penetrate dust. Infrared radiation from the Milky Way’s plasmoid is typical of that given off by stars, indicating strong electrical stress. That electric field acts like a particle accelerator, so electrons spiral in its electromagnetic field, emitting wavelengths over many frequencies.

Since plasma is composed of charged particles, any movement constitutes an electric current, which generates a magnetic field. Synchrotron radiation can shine in all frequencies, as well as preserve initial power output from the Sun. It is solar plasmoids that activate the Sun’s output, sending a variable electric “wind” of charged particles through the Solar System.