Home Picture of the Day Chicxulub 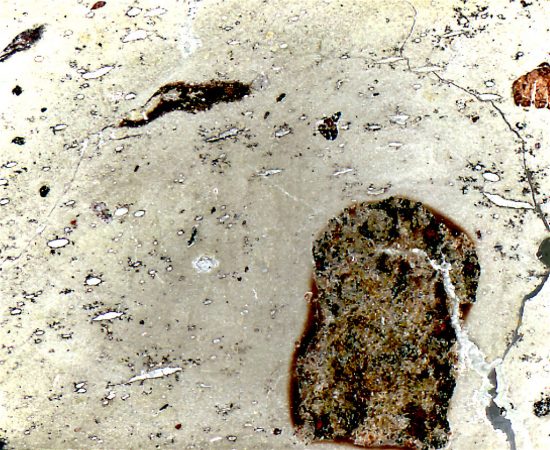 A melted rock sample from 864 meters deep in the crater floor. Photo credit: David A. Kring

Did a 10-kilometer-wide asteroid strike Earth and excavate a crater?

Off the coast of Mexico is what geologists believe to be an impact basin caused by the collision of an asteroid. It is a multi-ringed structure, similar to those mentioned in a previous Picture of the Day, approximately 300 kilometers in diameter. The impact is said to have melted Earth’s crust to a depth of 27 kilometers. Probably the most significant aspect to Chicxulub crater is that it is thought to be what caused the extinction of the dinosaurs. Consensus opinions date the crater to 65 million years ago.

Multi-ringed formations share features in common: flat plains with vertical sidewalls; secondary plains that look like V-shaped canyons; and additional rings of cliffs extending outward from the central uplift. That pattern can be repeated many times, with shorter cliffs and broader plains, until they finally merge into the bedrock.

As conventional geologists see it, the Chicxulub event created a layer of iridium-rich sedimentary formations around the world (along with other platinum-family elements), as well as deposits of tiny spherules, or “condensates” from vaporized rock. Iridium is thought to be of extra-terrestrial origin, according to prevailing theories (see Alvarez, Luis W., et al. “Extraterrestrial Cause for the Cretaceous-Tertiary Extinction: Experimental Results and Theoretical Interpretation.” Science 208 (1980) 1095-1108). Along with iridium, cristobalite inclusions are found in the matrices of glassified rocks, such as obsidian. However, there is no evidence in the spherules for other minerals found in the region.

Was it a gigantic block of stone that formed Chicxulub? Alternatively, as previously proposed, did electric arcs of unimaginable force travel through the region, vaporizing the terrain and blasting out a hole?

Since the majority of iridium around the world is contained in glassified spherules, or silica glass deposits in various places, the ability of electric discharges to vaporize and then condense rock strata should be considered, especially since laboratory experiments demonstrate the conclusion. Also, a z-pinch in the discharge will create compressive forces, pulling material out of the surface and launching it upward, where it rapidly cools and condenses.

Around Chicxulub is evidence for tremendous shockwaves that passed through the sediments. Biotitic mica is found in “kinked bands.” Shattercones also exist in the layers surrounding the crater. Most geologists believe that shattercones are undeniable evidence for an impact scenario, so their presence provides confirmation for the theory. Melted rocks and fused breccias are also thought to be confirmation for the theory, since craters in other parts of the world reveal the same effects. But can the impact of a big rock moving at 45,000 kilometers-per-hour be the cause of these various phenomena?

Shattercones can be construed as evidence for electric discharges through the stone. A discharge powerful enough to form a 100-kilometer crater would be sufficient to generate shattercones pointing to the blast origin. It is significant that shattercones in Chicxulub point downwards and to different points of origin. In an impact crater, the shattercones should point upwards to a single point. Shattercones may be Lichtenberg figures preserved in the stone.

One example is the layering of distributed debris. A spinning electric arc will machine down through layers of soil, blasting the melted slag across a wide area as it snakes through the terrain. In fact, some of the geologically unique glassified stone droplets near Chicxulub are found around the world. In general, as Electric Universe theory posits, most of the so-called impact craters around the world should be reconsidered from an electrical perspective.