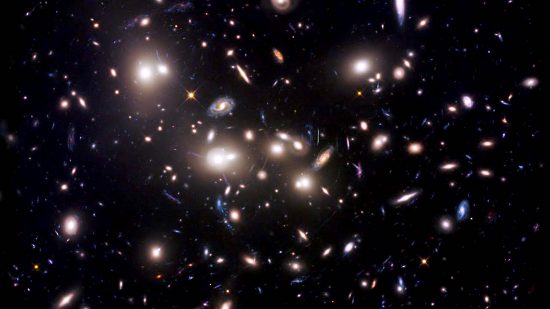 Electric Universe theory does not depend on something undetectable.

“Space is filled with a network of currents which transfer energy and momentum over large or very large distances. The currents often pinch to filamentary or surface currents. The latter are likely to give space, as also interstellar and intergalactic space, a cellular structure.”
— Hannes Olof Gösta Alfvén

Dark matter theory is problematic, yet astrophysicists continue using it to explain distance, age, and structure in the Universe. They do so in order to save their commonly held beliefs about its origin, as well as how it behaves. The vast majority of cosmological theories depend on gravity-based phenomena, while ignoring plasmas in space and their associated electric fields.

Dark matter possesses no electromagnetic signature, so it cannot be examined with any instrument at any bandwidth. In conventional terms, its existence depends on observing its gravitational effects on “ordinary” matter. Galaxies are said to require dark matter so that they do not fly apart, for example, or to hold them in clusters: dark matter “haloes” are thought to surround galaxy clusters.

According to a recent press release, astronomers from the Harvard Center for Astrophysics collated Hubble Space Telescope images of galaxy clusters with computer models of dark matter haloes, finding (to no one’s surprise) some agreement with consensus dark matter proposals. There were discrepancies between their simulations and the observations, but “…they suggest these issues might be resolved with more precise simulations.”

Conventional theories miss the mark by assuming that galaxies are born of gravity, alone. Gravity is an extremely weak force when compared to electromagnetism. Galaxies exhibit electrical activity, since each star is the locus of electric charge flow. Such flows of electricity are known as Birkeland currents, named after Kristian Birkeland.

Electricity in space exists in three forms: dark mode, glow mode and arc mode. The best known is probably arc mode, since that is the condition in which it is most easily seen. Stars are arc mode plasma discharges. However, dark mode discharges, as their name implies, are not readily visible, but they are just as capable of electromagnetic interactions as the other modes.

Electricity powers galaxies as it moves out of their polar axes and then back through their discs. This means that a circuit exists that receives its energy from Birkeland currents that connect each galaxy with the rest of the Universe. Presumably, billion-light-year long strands of magnetically confined electric filaments are transmitting power from one end of the cosmos to the other.

Forces exerted by electrified plasma contained in those twisting filaments dominate the Universe. They circulate in a cosmic circuit with long-range attraction between them. A more plausible theory is that those filaments of electrified plasma, with billions-of-trillion-times more intense fields of influence than gravity, are what hold clusters and their associated galaxies together. In an Electric Universe, it is dark mode electric current and not dark matter that maintains its stability.