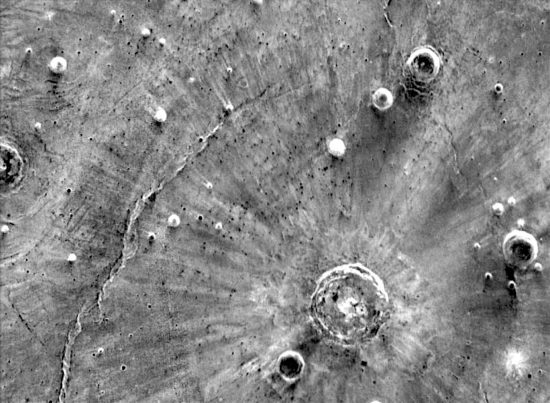 Craters, canyons, dunes and many other features do not readily correspond to contemporary theories about their evolution. Dunes on Mars often do not align with prevailing winds, and do not indicate any movement after years of observation. Other anomalies include crater rims with steep vertical walls and kilometer-deep canyons with no outflow channels.

Recently, astrophysicists from Brown University announced that asteroid impacts on Mars generated near-supersonic winds that “… scoured the surface and blasted away dust and small rocks…”

A closer examination of the rays reveals smaller craters mixed in with the shallow streamers—a phenomenon like that seen on the Moon. In fact, many of the rays terminate in small craters. According to conventional analysis, the tiny craters around the lunar crater, Tycho are “secondary impact points” created by larger chunks interspersed with dusty debris thrown out from the initial strike.

Since Mars has virtually no atmospheric pressure and no magnetic field to shield it from the Sun, it is similar to the Moon. If the craters and rays so prominent there can be explained by electrical activity, then features on Mars might also be illuminated by an electrical hypothesis.

In a previous Picture of the Day article, a report from Ralph Juergens took issue with the consensus opinion regarding lunar formations. In his 1974 treatise he wrote:

“….not only the presence of the secondary craters in connection with ‘each ray element,’ but their placement always ‘at the near end,’ poses a problem for the ejection hypothesis. Is it conceivable that larger objects randomly mixed with fines in ejecta streams would always manage to drop to the surface just at the inner ends of fallout patterns produced by the fines? The strange proportions of Tycho’s long rays seem all-but-impossible to reconcile with ejection origins. Enormous velocities of ejection must be postulated to explain the lengths of the rays, yet the energetic processes responsible for such velocities must be imagined to be focused very precisely to account for the ribbon thin appearance of the rays.”

Juergens thought that Tycho crater was a lightning discharge scar. The hard, smooth, radar-reflective floor of Tycho, as well as the lack of depth to its rays, indicated to him that kinetic forces from mechanical impact were not sufficient to explain those attributes.

According to Juergens, Tycho’s rays are the paths that electrons formed when the secondary discharge erupted into space, completing a circuit with a lighting leader stroke. It is probable, based on that analysis, that rays around craters are not ejected material that flew outward from an impact event, but are the mark of charged particles rushing inward toward the center, dragging fine dust along with them because of attractive forces.

Rays, central peaks and flat floors are not the only peculiar aspects to craters observed on Mars. Concentric rings are another. In Picture of the Day articles about Jupiter’s moon Callisto, Saturn’s moon Tethys, and the planet Mercury, multi-ringed basins are demonstrated to be due to electric discharge machining (EDM).

“So, what are we to make of the orthodox dating of the channels on Mars to almost 4 billion years ago? Relative dating of surface features relies upon comparisons of crater counts on the surfaces of Mars and other bodies. Radioactive clocks are then used to pin down the age of surface rocks. We have for that purpose rock samples from the Moon and a small number of meteorites identified as originating from Mars. But if the initial states of the rocks are unknown and the clocks can be upset by energetic electrical discharges, geologists are left with little else to date the surface features of Mars other than to count craters.”