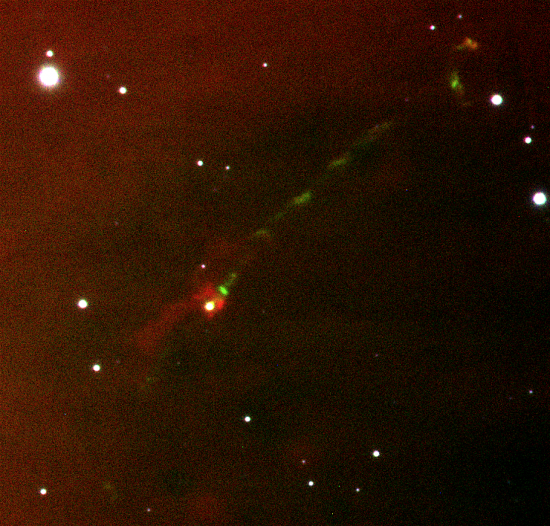 Brown dwarf stars are another class of stellar object that emit jets of material.

A recent press release reports detecting a jet of material erupting from a brown dwarf star. A brown dwarf star earns its name because it is too small to sustain hydrogen fusion reactions and shine like larger ones do.

Collimated jets are normally thought to result from stellar gas falling into the putative gravity field of a black hole. According to theory, as they orbit closer to the black hole, particles are accelerated to extreme velocities, causing violent collisions that can generate X-rays and other high frequency radiation. Eventually, somehow, the acceleration creates a powerful filamentary jet.

Astronomers also find ionized particles and X-rays from various stars that are highly organized. It is difficult for them to explain their findings because, as mentioned, the theory is that dust and gas are energized by collisions as they orbit a black hole. Regardless of the source, there is only one force that can hold a matter stream together over long distances: electromagnetism. The only way to generate that electromagnetic confinement is with electricity.

Failing to realize that electric charge flow creates magnetic fields has led to many models that provide incomplete solutions to the problems of energy and confinement. Nobel laureate Hannes Alfvén noted that plasma is “too complicated and awkward” for the tastes of mathematicians. It is “not at all suited for mathematically elegant theories” and requires laboratory experiments.

Alfvén observed that the plasma Universe had become “the playground of theoreticians who have never seen a plasma in a laboratory. Many of them still believe in formulae which we know from laboratory experiments to be wrong”. He thought that the underlying assumptions of cosmologists “are developed with the most sophisticated mathematical methods and it is only the plasma itself which does not ‘understand’ how beautiful the theories are and absolutely refuses to obey them.”

Analyses of gas giant planets and their relationship to brown dwarfs leads Electric Universe proponents to suggest that jets are not surprising when Jupiter and Saturn are considered. Both giant planets exhibit electrical aspects that could easily evolve into brown dwarf behavior if they were energized by stronger electric fields. Such increased electric charge flow would mean more and stronger plasma discharges, like jets.