Home Picture of the Day Field of Vision 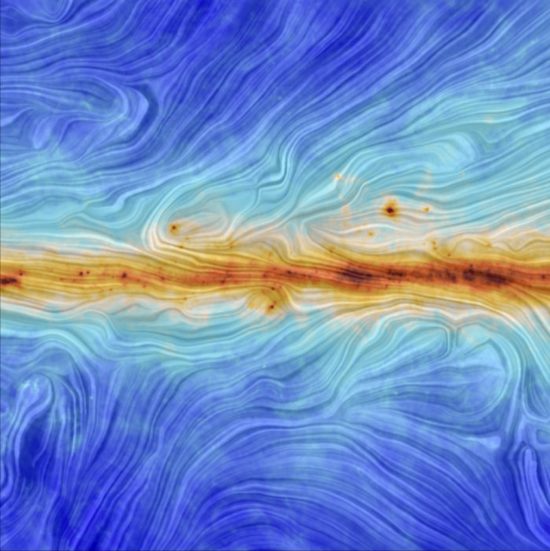 New ways to see the cosmos.

Electromagnetism is critical to understanding many aspects of cosmology, because it controls how interstellar gas, primarily composed of charged particles, circulates through and around galaxies. Not much is known about galactic magnetic fields, however. Using the principle of Faraday rotation in radio waves, astronomers are delving deeper into how such fields are generated and organized.

In 1845, Michael Faraday discovered that polarized light propagating through matter parallel to a static magnetic field experiences a rotation in the plane of polarization. That effect is used by astronomers to detect and map electromagnetic fields in space, since radio waves are affected by them as they travel through the Interstellar Medium.

Astronomers detected the field associated with the Magellanic Stream by observing radio signals from galaxies behind it. Since radio waves are another form of “light”, the Stream’s electromagnetic field rotates the radio signal’s polarization, providing a way to map that field.

Since galaxies are moving through plasma in space, and are affected by the movement of electric charge, filaments of intergalactic plasma point to electricity as the active agent. Magnetic fields cannot exist without an electrical counterpart, so this observation confirms Electric Universe ideas.